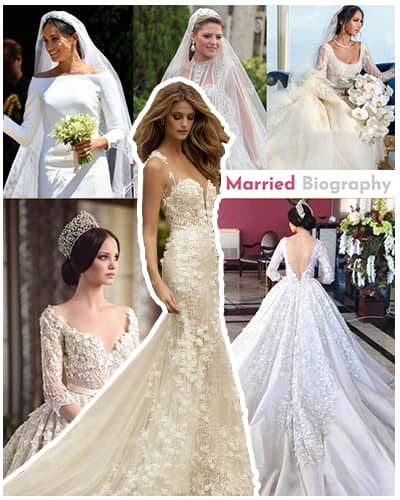 A wedding is a ceremony where two people are united in marriage. And the wedding dress serves as a reminder of that day. Brides spent lots of time, and money to find the perfect wedding dress.

These are some celebrities how had to wear stunning wedding dresses.

Priyanka is an Indian actress, singer, and film producer. She is one of India’s highest-paid actresses. Similarly, she is also a Hollywood actress. she has appeared on many TV shows and movies. Likewise, she is also the winner of the miss world 2000 pageant.

Similarly, this entertainer is happily married to an American singer, songwriter, and actor Nick Jonas. This couple tied their knot on December 1, 2018, in Umaid Bhawan Palace in Jodhpur. This couple performed their weeding in two different ways as Hindu and Christianity.

This actress’s wedding dress was designed by Ralph Lauren. The long sleeve dress was made with 135 satin-covered buttons, 700 spools of ivory thread, and 11, 632 crystals. She wore a 75-foot long wedding veil.  Likewise, at her Indian ceremony, she wore a glittering red lehenga which was designed by Sabyasachi. The lehenga was made of organza flowers, silk floss, and siam red crystals. Her white gown cost $2 million whereas her red lehenga cost Rs 18 Lakh.

Kim is an American media personality, socialite, model, businesswoman, producer, and actress. She has her own cosmetic company named KKW beauty. This star has tied her knot with Kanye West in May 2014. Kanye is an American rapper, record producer, businessman, fashion designer, and politician. Likewise, Kim on her wedding dress.

Designer Riccardo Tisci who works for Givenchy design Kim’s wedding dress. The gown cost $500,000 made with long sleeves and a trumpet silhouette. Kim has six wedding dresses in total. Likewise, This couple has four children together North, Chicago, Saint, and Psalm West.

You may also like to read Make your wedding Royal! Wedding album of the Crown Prince Carl Philip and Sofia Hellqvist

Hailey is an American model, media personality, and socialite. This American model has also appeared on many TV shows and she has collaborated with clothing brands. On September 13, 2018, Hailey wed Justin Bieber in Montage Palmetto Bluff hotel in South Carolina, USA. Justin Bieber is an is a Canadian singer.

This model wore a gown designed by Virgil Abloh on her wedding day. Even though their wedding was in private, Later Hailey was spotted in a white shoulder-off lace gown and dramatically long vail with the words “Till the death do us part”.

Serena is an American professional tennis player and former world No. 1 in women’s singles tennis. This American player has tied her knot with Alexis Ohanian on November 16, 2017, in New Orleans. Alexis is an American internet entrepreneur and investor. Likewise, This happy couple has a daughter named Alexis Olympia Ohanian.

Serena’s wedding dress is best known as it is the most expensive wedding dress among Hollywood celebrities. Her gown worth $3.5 million. Likewise, she was looking stunning in her wedding dress as it was designed by Sara Burton. Her gown was fluffy and made of white silk looking very attractive.

Sofia is a Colombian-American actress, television producer, presenter, and model. She has been the highest-paid actress for seven-year respectively. She has wed Joe Manganiello on  November 21, 2015, in Palm Beach. Joe Manganiello is an American actor.

Sofia’s wedding gown cost $3 million and was designed by Zuhair Murad. Likewise, her wedding gown adorned with several pounds of sequins, pearls, and crystals. moreover, the gown was separable from the overskirt. Her wedding dress was heavy and lots of silk were used. However, she was looking really stunning and beautiful.

Beyonce is an American singer and actress. Her many albums have hit the billboard 100 hit albums. On April 4, 2008, this singer married Jay Z. Likewise, Jay Z is an American Rapper, songwriter, record executive, businessman, and record producer. They have three children together Blue Ivy, Rumi, and Sir Carter.

Beyonce wore a white gown designed by Galia Lahav which worth $12,143 on her wedding day. Her strapless gown with neckline and elaborate ruffled train with a long veil. Similarly, She had tied her hair up and added dainty earrings. moreover, she had her manicure done in blue color.

Gwen is an American singer and songwriter. She is also a lead singer of a music group named No doubt. This singer was married to Gavin Rossdale in 2002 in London. Unfortunately, this marriage broke in 2016. This couple has three sons Kingston, Apollo Bowie, and Zuma Nesta Rock Rossdale.

Gwen wore a gown designed by John Galliano. Likewise, her gown was made of silk faille with a white bodice and hot pink skirt. She wore a rock ‘n’ roll gown. She wore a long veil with floral embroidery.

Allison is an American actress and singer. She is best known for her role as Marnie Michaels in the HBO comedy-drama series. Likewise, This actress was married to Ricky Van Veen on September 19, 2015, in a private ceremony in Saratoga, Wyoming. Whereas, Ricky is an American entrepreneur and the Head of Global Creative Strategy at Facebook.

Miranda is an Australian model and businesswoman. In 2007, May was announced as one of the Victoria’s Secret Angels. In May 2017 Miranda tied the knot to Evan Spiegel. Likewise, He is co-founder and CEO of Snapchat.

Maria Grazia Chiuri of Dior designed her wedding gown. The gown was in long sleeves, antique Belgian lace, silk, taffeta, tulle, and delicate floral embroidery. Similarly, she matches her veil with her dress as it was floral embroidery.

You may also like to read What went wrong in the 27 years of marriage of Bill Gates and Melinda Gates? Is divorce really the solution!