Quentin Leo Cook (Fatboy Slim) has married two times in his career. He married Philippa Watson in 1986. The marriage was short-lived and the pair separated in 1988.

Cook later married TV personality Zoë Ball on 20 August 1999. The wedding ceremony took place at Babington House in Somerset. After breaking up in January 2003, the pair reconciled after three months. They have a son Woody Fred Cook and a daughter Nelly May. The couple separated after 18 months on 24 September 2016. 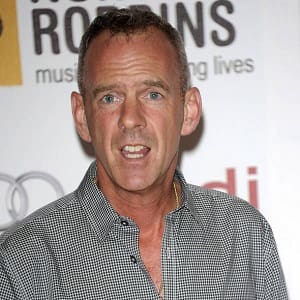 I'm not a big fan of football records. I thought Three Lions was quite a good anthem and World In Motion was a good record, apart from the John Barnes rap.

I think English people were a lot better at breakdancing than they were at making records.

I try to make people smile and dance, not think about things or educate them.

I make music for the hips, not the head.

Who is Fatboy Slim?

Fatboy Slim is also known as Quentin Leo Cook is an English musician, DJ, and record producer. Previously, he was the bassist for the band the Housemartins. Additionally, he also formed the Brighton Port Authority with David Byrne in 2008. Presently, he has the record Record for the most top 40 hits under different names.

Cook was born as Quentin Leo Cook in Bromley on July 31, 1963. Throughout his childhood years, he grew up in Reigate, Surrey. He developed a keen interest in the world of music since his childhood years. He is of British nationality. Furthermore, he belongs to the English ethnic background.

Talking about his education, Slim attended Reigate Grammar School. Additionally, he was also enrolled at Brighton Polytechnic to read a B.A. in English, politics, and sociology.

Cook has used several aliases in his performances. Some of them include Arthur Chubb, Cheeky Boy, Cook Da Bass, The Feelgood Factor, Margret Scratcher, Mighty Gus Poyetz, Stomping Pondfrogs and Yum Yum Head Food among others. To date, he has collaborated with several artists including The Brighton Port Authority, Fried Funk Food, Rockaway Three, and Pizzaman among others. He has released four albums, ‘Better Living Through Chemistry’, ‘You’ve Come a Long Way, Baby’, ‘Halfway Between the Gutter and the Stars’, and ‘Palookaville’.

Slim has not revealed his current salary. However, he has an estimated net worth of around $ 30 million as of 2022.

Cook’s long history of alcoholism has been criticized over the years. Additionally, he checked into a rehabilitation center in Bournemouth on 4 March 2009At present, there are no rumors concerning his life and career.

Talking about his body measurement, Slim has a height of 6 feet (1.83 m). Additionally, his hair color is dark brown and his eye color is blue.