Fats Domino is an award-winning American pianist and singer-songwriter. He had three dozen Top 40 pop hits. Fats had eight children.

Fats Domino was married to Rosemary Domino on August 6, 1948, and lived a single life after she died in 2007.

The couple has eight children in their married life. And, his children’s names are Antonio, Adonica, Antoinette, Andre, Andrea, Anola, Anatole, and Antoine III Domino.

Despite his widespread fame, his personal life was merely seen in the media. So, he must have had a happy married life.

Fats was a shy and happy guy. He always had an excellent countenance. However, there were not any rumors about his personal life and affairs.

And even if there were any of his personal secrets, they are all buried six feet under the earth. 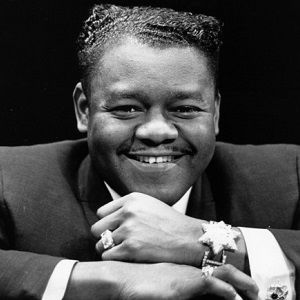 Well, I wouldn't want to say that I started it (rock 'n' roll), but I don't remember anyone else before me playing that kind of stuff.

Everybody started calling my music rock and roll, but it wasn't anything but the same rhythm and blues I'd been playing down in New Orleans.

Who was Fats Domino?

Fats Domino was an American musician. He was mainly famous as a pianist, singer, and songwriter. He was one of the legend Rock and Roll artists.

Fats is widely famous for his numerous hits in the period of 1955 and 1960. Also, he was able to sell millions of records.

Fats passed away on October 24, 2017, at his home in Harvey, Louisiana, the US at the age of 89. His death was natural. But his death shocked many of his fans and the music industry.

Domino’s birth name was Antoine Dominique Domingo Jr. and he was born on February 26, 1928, in the home of Jazz New Orleans, Louisiana, the U.S.

He was born to the couple Antoine Caliste Domino and Marie-Donatille Gros as the eighth child. His father was also a musician who played the violin. And he belongs of French Creole descent.

He has a brother, Red Top Young.

Talking about Fats’ childhood, most of his actual childhood details are currently missing.

Fats’ do not have any renowned certificates. After attending Louis B. Macarty School for about four years, he left and never tried to take the school classes.

However, he learned to play the piano from his brother-in-law Harrison Verrett.

During an interview, he expressed his academic view by quoting ‘A lot of fellows nowadays have a B.A., M.D., or Ph.D. Unfortunately, they don’t have a job.’

This suggests that he was not interested in receiving any qualification, rather he was most focused on his profession.

Fats Domino started his professional career as a pianist in 1947 when he was only 14 years old. Initially, he played in a bar, but later Billy Diamond selected Fats to play in his band.

And then he started gaining major success and popularity. During his career, he worked with various artists including, Herbert Hardesty, Reggie Huston, Lee Allen, and Earl Palmer. However, his major success came from his own band.

Among his many recognizable songs of them are, The Fat Man, Ain’t That a Shame, Blueberry Hill, and I’m Walkin.

These records have been his greatest work and due to these records, he has many awards under his name. And, many of these songs are used as a learning piece and are still covered by many artists.

He had the main contract with Imperial Records during 1949-1960. In addition, Paramount Records, Reprise Records, and Mercury Record also worked with Fats.

Other than his musical career he has made appearances in television series and movies too. In 1956, he appeared in Shake, Rattle & Rock! and The Girl Can’t Help It. In 2012, he was seen in the television series Treme.

There is a long list of Fats’ awards and honors.

Some of his greatest awards are, Grammy Lifetime Achievement Award, and Rhythm and Blues Foundation Pioneer Award. Also to honor his work every January 27 is celebrated as ‘Fat Domino Day’.

Furthermore, in 1998, Bill Clinton awarded him with the National Medal of Arts.  And during his active career, he was the second person to sell records after Elvis Presley.

He has been one of the most influential artists in modern music.

Fats’ biggest wealth has been his records. But talking about his literal wealth he has had an $8 million net worth.

However, he has left his previous record with us.

Fats’ has had a peaceful life considering his involvement in controversies.

The fact that there were no rumors or controversial topics relating to him, implies that he maintained a low social status throughout his career.

Furthermore, he was 5 feet and 5 inches tall. However, many other details about his body are currently not available.