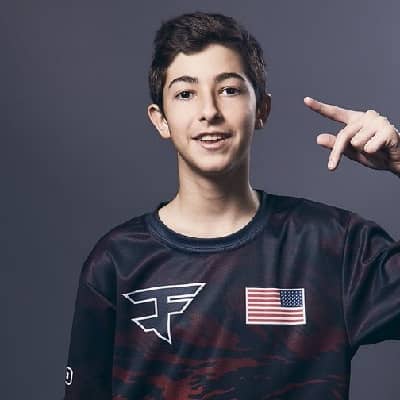 FaZe Megga is not dating and is possibly single. He hasn’t disclosed details about his affairs or girlfriend.

FaZe Megga is an American social media personality. He is popular for his YouTube content where he posts Fortnite gaming videos.

He was born on 15 Oct 2004 in the US and his real name is Noam “Megga” Ackenine. But details about his father and siblings are unavailable.

However, he referred to his mon, Mathilde Ackenine on his 16th birthday on Twitter. He belongs of Caucasian descent and but his academic details are unknown.

FaZe Megga is very popular on YouTube. He uploads and streams game-related videos.

His other notable uploads are I SURPRISED my Brother with a NEW GAMING SETUP *$2000*, MOVING TO THE FAZE HOUSE?! *w/ Faze Banks, HighSky + MORE*, MY BEST FRIENDS React to my BRAND NEW Tesla (0-60) | Megga, FaZe Megga Highlights #9, and more.

Besides YouTube, FaZe is also a popular Twitch user. His megga titled Twitch account has more than 370k subscribers. He usually streams video of Fortnite game.

Furthermore, he bought his dream car Tesla and made a video about it.

He is doing great in his digital career. So, this YouTuber is not surrounded by any type of scandal or rumors.

Regarding FaZe Megga’s body features, his height and his body weight are in average size. Looking at his pictures, the color of his eyes is dark brown and his hair is also dark brown color.

FaZe is available on social sites. He has an Instagram accounts. His fazemegga account has over 1m followers. His post of 09 Dec 2020 with a puppy is loved and appreciated by his fans.

From June 2018, he started his appearance on Twitter and has over 546k followers. However, he is unavailable on Facebook and TikTok.

To read about Lindsay Capuano, Alejandro Rosario, and Alec Steele please click on the links.