Updated On November 15, 2022 | Published By: raheen munnie
Share this
Married 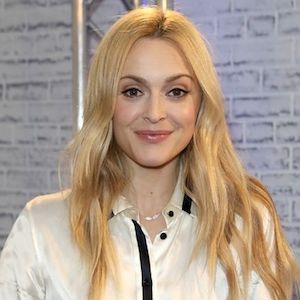 I admire the strength and courage of all young people faced with difficult situations in life. You are an inspiration to me and so many people around you, as you overcome challenges and come out of it stronger

Presenting Saturday mornings has been a dream for a long time. And one day in September I am going to wake up very early and it will be a reality. I can't wait

What is the relationship of Fearne Cotton?

Fearne Cotton had three past relationships. She has been in a relationship with Steve Jones (2008), Ian Watkins in 2004 but the couple separated in a year that is in 2005.

She had also been encountered with Peter Brame (2003). Cotton dated skateboarder Jesse Jenkins who proposed on her 29th birthday. But unfortunately, the couple split nine months later.

Currently, she is married to Jesse Wood. They have married on 4th July 2014. Jesse Wood is the son of Rolling Stones guitarist Ronnie Wood. She has a son whose name is Rex Wood and a daughter named Honey Krissy Wood.

Cotton has some good friends’ fellow TV presenter Holly Willoughby. With Holly Willoughby, she has co-presented several shows. Similarly Cotton has acted as two of the bridesmaids at Willoughby’s wedding to Dan Baldwin on 4 August 2001 with her friend Sarah Cawood.

Who is Fearne Cotton?

Fearne Cotton is an English TV personality and is also a radio presenter for Top of the Pops and Red Nose Day. She is best known for her work with Celebrity Juice and The X Factor.

Fearne Cotton was born on the 3rd of September, 1981 in Northwood, Greater London, England.

She was born to Jamie Cotton(father) and Lin Cotton(mother). Her father was a songwriter. He used to write songs in events such as Live Aid and her mother worked in alternative therapy.

She has a brother’s name is Jamie Cotton and grew up in Eastcote, Hillingdon in Middlesex.

Cotton had her education at Haydon School and is also a pescatarian. She has participated in several half marathons for charity.

She had studied art at A-level, a skill she made use of whilst presenting the series Draw Your Own Toons.

Fearne Cotton first came into fame because of “The Disney Club”. She became the first female presenter of BBC Radio 1’s Chart Show. She began her presenting career in 1996 when she was 15.

This TV star used to start with the early morning GMTV children’s program The Disney Club after winning a competition for young talent to present the show. In 2001, she joined CBBC to present the children’s science program Eureka TV.

In the year 2006, Cotton presented the second series of “Live Island” with “Patrick Kielty” on ITV, taking over from Kelly Brook.

In June of the year 2012, Cotton became one of the BBC’s presenters for its coverage of the “Thames Diamond Jubilee Pageant”

Regarding her involvement in other channels, she had also presented the Friday Night love eviction program that year for the “Channel 5” reality television series “Make Me Supermodel”. She hosted Sky1’s talent search “Must Be the Music” for one series in 2010.

Cotton had been involved in various radio channels as well. In 2005, September, she joined BBC Radio 1 for presenting the Friday early morning slot with Reggie Yates, whom she had previously worked with on CBBC.

Cotton wrote an advice book entitled The Best Friends Guide to Life as a partner with Holly Willoughby which was published in October 2010.

She has collected a net worth of around $4 million as of 2022, from her professional career. But her salary is unknown.

Cotton is a very smart person and knows how to handle her personal and professional life. There are no such rumors and controversies related to her.

Fearne Cotton has a slim type of body structure. She has maintained her body with a well-updated schedule of her diet. She has also plenty of exercises as she runs 5 km every week.

In her childhood, she has also participated in various marathon competitions. Her height is 5 feet 6 inches and her weight is 120 lbs (55 kg). Her eye color is Hazel and her hair is blonde colored.

The most notable among her tattoo is of fern leaf and covering her right hip up to her rib cage. Her body measurements are 34-25-34 inches and wear a bra size of 34B. Her dress size is 2 (US) and her shoe size is 9 (US).