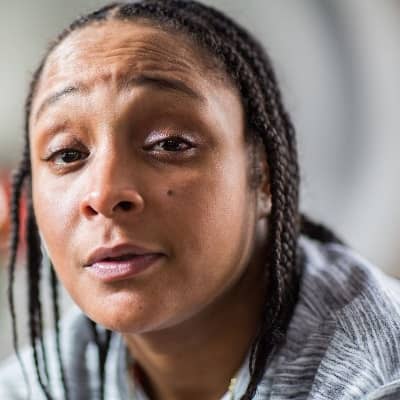 As per the sources, Felicia has not been dating anyone which is good news for her fan followers. In the past, she has been romantically involved with Bernice Burgos and Judith “J” Adrienne.

However, she is single currently. If she is in any relationship she has kept secret and not revealed anything about her love life. As for now, we might consider Pearson to be single and she is a lesbian.

Who is Felicia Pearson?

Felicia Pearson is an American actress, rapper, and author who portrayed the role of Felicia “Snoop” Pearson on The Wire. She is also popular for her book, Grace After Midnight, where she has written about her early days and her time in prison for second-degree murder.

Additionally, she was also made her appearance on the seventh and eighth cycles of the VH1 reality television series Love & Hip Hop: New York.

She was born to her parents who were drug addicts. Therefore, she grew up in an East Baltimore foster home. Likewise, her childhood passed in difficulties. She was a drug dealer as a teenager.

At the age of sixteen, she was sentenced to two eight-year terms, at the Maryland Correctional Institution for Women in Jessup, Maryland for the second-degree murder after the shooting of a girl Okia Toomer. She was released after six and a half years and decided to change her lifestyle.

She is of American nationality. Similarly, her birth sign is Taurus.

Felicia started her journey from a local job fabricating car bumpers. However, she was fired after two weeks when they knew that she had a prison record. However, she decided on her journey towards television appearances and movies. She met Michael K. Williams, who acted as Omar Little on The Wire, in a Baltimore club and her fate was changed.

Rosman made her professional television debut aged 24 years where she acted Felicia ‘Snoop’ Pearson on the long-running television series ‘The Wire’ in 2004-2008. Altogether, she has done 27 episodes in the respective series. Moreover, she has portrayed the role of WIZ in the 2015 Tv series, ‘By any means.’ Her role in the series got huge recognition and was much appreciated by the audiences and critics. Some of her other Tv series are Baselines, Blue Bloods, and Swagger.

Besides, TV series she has acted in the 2013 film ‘They Die By Dawn’ in the role of the character Bartender. Similarly, she also appeared in the romantic tragic comedy movie ‘When The Tables Turn’ as Mia. Moreover, some of her other movie appearances are:

and others. Moreover, she has also produced the film, Grace After Midnight Pain.

Of all her acting, movies, and television appearances, why not she has a net worth of around $500K. Likewise, Felicia is a dedicated and hardworking person who focuses on her professional career.

Felicia was nominated for the Vision Award in 2009.

There are no rumors and controversies about her personal life or professional life. Likewise, Felicia is a dedicated and respected personality who tries to mark her place in the showbiz industry.

Felicia stands at 5 feet 7 inches tall and weighs 60 Kg. Similarly, she has a slim-shaped body. She has black hair and dark brown color eyes.