Talking about her love life, Felicia Spencer is living a married life along with her longtime boyfriend, Todd Coppinger. The couple tied the knot in the year 2019.

However, they do not have any children at the present. The couple has a daughter named Addie from Todd’s previous relationship. Felicia has not shared her personal things on the media and in the public. 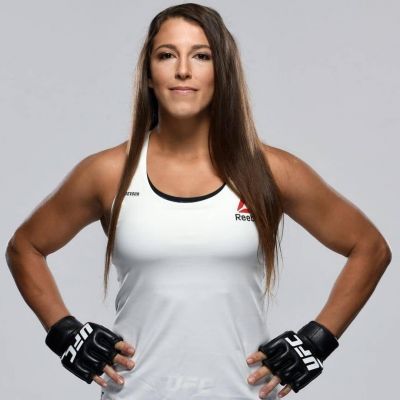 Who is Felicia Spencer?

Moreover, she has a record of 8 wins and 2 losses out of her 10 professional matches.

Felicia Spencer was born on 20 November 1990. At present, her age is 30 years old. Likewise, her birthplace is Montreal, Quebec, Canada.

Not much known about her father and mother’s details, Felicia has been secretive towards her parent’s details. Moreover, she has two older brothers with whom she started training in Taekwondo, at the age of four.

Talking about her nationality, Spencer holds a Canadian identity whereas her ethnicity is Caucasian.

Regarding education, the star attended the University of Central Florida. Earlier, she joined Jungle MMA in 2009 and finished her higher education at Lemon Bay High School.

Professionally Felicia began her amateur career in 2012. After getting her first win in the Tuff-N-Uff Future Stars of MMA tournament, Spencer knocked out Jessica Eve Richer at the second “Ruff-N-Uff Xtreme”. She has a record of 5-1 in the tournament and later was signed by Invicta FC in 2015,

Additionally, Spencer started her promotional debut on 12 September 2015 at Invicta12: Evinger vs. Kianzad against Rachel Wiley. In the event, the star won via technical knockout in round one. Likewise, she earned her next fight after eighteen months on 25 March 2017 at Invicta 22: Evinger vs Kunitskaya 2.

In the event, Felicia fought with Madison McElhaney in a Featherweight bout. She won the fight via unanimous decision with the scoreboard of (30-27, 30-27, and29-28). On 16 November 2018, Spencer faced Pam Sorenson at Invicta FC 32: Spencer vs Sorenson for the vacant Invicta Featherweight title.

The athlete became victorious in the fight via a rear-naked choke in round four and crowned the champion belt. Spencer then signed with UFC in March 2019. She debuted on 18 May 2019 against Megan Anderson and won the fight in the first round by rear-naked choke.

Next, the athlete faced Cris Cyborg in the co-main event on 27 July 2019 at UFC 240. Sadly, she lost via unanimous decision. Freshly, Felicia was scheduled to face Danyelle Wold on 22 May 2021 at UFC Fight Night 188. She was replaced by Norma Dumont. Unfortunately, she lost the bout via split decision.

A talented Canadian fighter, Felicia has earned a handsome amount of money from her profession. She also works as an algebra teacher at Florida Virtual School.

It is reported that Felicia Spencer has an estimated net worth of $500 thousand to $1 million.

However, the ultimate fighter has not disclosed her exact salary, earnings, and assets details till now.

Felicia has never been part of any controversial matter or rumors till now. The martial artist has been occupied with her professional and private life.

It seems that Spencer prefers enjoying her personal life and does not want to merge it with her professional life.

30 years old star, Felicia has beautiful looks as well as an admirable personality. She stands at a height of 5 feet 6 inches. Also, she has a balanced body weight of 66 kg.

Furthermore, Spencer has dark brown eyes whereas her hair is brown.

Regarding her social media presence, Felicia Spencer is an active personality on social media. Felicia has more than 75.8k followers on her official Instagram account @feenom479.

She is also active on Twitter with around 14k followers.

Moreover, Spencer is also available on Facebook with nearly 14k fans and supporters.