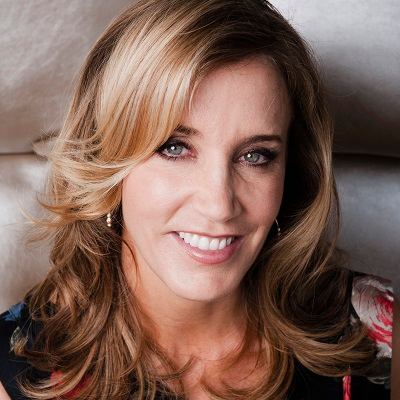 I look OK. I look better in person than I do on film, which is bad because it's how I make my living, but I am not a beauty and on balance I am glad.

Congress is attempting to eviscerate women's health care. Like many women across America, I am outraged.

Beauty can make you powerful in a way that isn't good for you. Being OK is better for the person I have become.

Felicity Huffman is married to William H. Macy. Her husband, William is an actor by profession. The couple exchanged vows on the 6th of September 1997.

Before the wedding, the couple dated each other for 15 years. At the time, the couple had an unsteady relationship as they used to have on and off the dating history.

Together, the couple is blessed with two daughters; Sophia and Georgia.

Who is Felicity Huffman?

Felicity Huffman is an Academy Award-nominated actress and producer. She is renowned as Bree of the movie, Transamerica.

Last, in 2019, she appeared in the movie, Tammy’s Always Dying as Tammy.

Felicity Huffman was born on the 9th of December 1962 to Grace Valley (mother) and Moore Peters Huffman. His birthplace is Bedford, New York.

Her late father, Moore used to be a banker and partner of Morgan Stanley. When she was one year old, her parents parted their way via a divorce. Later, she found that her biological father was a family friend, Roger Tallman Maher.

When Huffman was eight years old, she moved to Snowmass, Colorado where she grew up along with his siblings.

Talking about her educational background, she completed her High School education from The Putney School. Later, in 1981, he graduated from Interlochen Arts Academy in Michigan.

Also, she joined New York University and the Royal Academy of Dramatic Art.

– In 1982, Felicity Huffman started her acting career with the theatre play, A Taste of Honey at Stage Theater. In the play, she portrayed the character of Jo. Moving forward, in 1988, she made her Broadway debut with the play, Speed-the-Plow in the role of Karen.

– Some of the theater plays credit includes Bobby Gould in Hell, Boston Marriage, Three Sisters, November, and many more. She received Obie Award for the role Donny in the play, The Cryptogram.

– After a successful career in theater plays, she expanded her career in the TV and Movie world. Some of her early TV projects include Golden Years, The Human Factor, The Heart of Justice, Bedtime, and Jules.

– In 1998, she portrayed the character of Dana Whitaker in the series, Sports Night. The series became one of her earlier milestones in her acting career. In 2003, she appeared in a recurring role in the series, Frasier as Julia Wilcox.

– The following year, she landed the lead character in the ABC’s comic series, Desperate Housewives as Lynette Scavo. The show became an instant success. For the show, she earned Screen Actors Guild Award (2005, 2006) and Primetime Emmy Award in 2005.

– In 2006, she appeared in the movie, Transamerica. In the movie, she portrayed the character of a transgender woman, Bree. With the movie, she reached the peak point of her career. For the role, she received a nomination for the Academy Awards for the Best Actress category.

– Following that, she appeared in the movies including Trust Me, Big Game, Stealing Cars, and Otherhood. Also, she has produced the movies Tammy’s Always Dying and Otherhood as an executive producer.

As a cast of Desperate Housewives, her earnings per episode are in the range of $275 Thousand.

Felicity Huffman has blue eyes with blonde hair. She stands at a height of 5 feet 5 inches and weighs around 55 kg.

On the 12th of March 2019, the FI arrested her in the charge of a Widespread College bribery scandal. She was accused to bribe to alter test scores of her daughter’s SAT. The primary objective behind the crime was to get her daughter accepted at Georgetown University.

On the 13th of May 2019, she pleaded guilty for the crime. For the fraud, she was sentenced to 14 days in jail with one year of supervised release. Also, she took 250 hours of community service. On the 27th of October 2019, she was released from the prison.

She deleted her social media account in 2019. As she faced huge merciless posts due to her involvement in a college admission cheating scandals.

You may also read the bio of Alice Evans, Emma Davies, and Sarah Bolger.