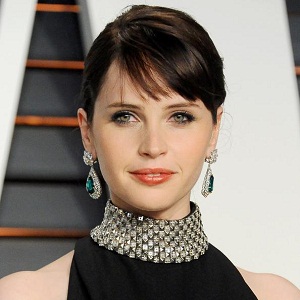 Once you're playing someone, you shouldn't be judging them in any way. That's what being an actor is - it's having empathy for people that are different from yourself. Once you've committed to that person, your responsibility is to tell that story

The more famous you get, in some ways it makes acting more difficult because you're more known as yourself. There's more of a narrative about you rather than about the character

I was very earnest and focused from quite a young age - and geeky. At school I was called a swot. I always thought that if you just put your head down and got on with work you'd get away with far more [mischief] than if you were being explicitly naughty, so I studied.

What is the relationship of Felicity Jones?

Felicity Jones was in a relationship with Ed Fornieles from 2006 to 2014.

She is now married to Charles Guard. They exchanged vows on 30 June 2018. This couple is expecting their first child. This news was announced in Dec 2019.

Who is Felicity Jones?

Felicity Jones is an English actress. She gave a fast start in the film industry when she was at the age of 12. In 1996, she was in the movie The Treasure Seekers 1996, when she was 12.

She was a versatile actress she took a part as Ethel Hallow for one season in the television show The Worst Witch and its sequel Weirdsister College.

Felicity Jones was born on 17 October 1983, in the UK. Her mother worked in advertising and her father is a journalist. She has English ethnicity.

Her uncle was also an actor (Michael Hadley), which inspired her to perform acts. One of the great grandmothers was Italian, from Lucca, Tuscany. After studying in Kings Norton Girls School, Jones attended King Edward VI Handsworth School, to complete A Levels.

She studied at  Wadham College, Oxford. When she was a child she uses to perform in stages and she also uses to take part in different plays. She loves cooking, especially Italian cuisine. She was a big fan of the BBC gangster series Peaky Blinders. Besides this, she hasn’t revealed her past days.

Felicity Jones started her career as a child actress. She was featured in the movie The Treasure Seekers. she took a part as Ethel Hallow for one season in the television show The Worst Witch and its sequel Weirdsister College. Then she appeared BBC series Servants.

Then she took apart on the radio the long-running role of Emma Grundy in The Archers. She appeared in the Donmar Warehouse production of The Chalk Garden in 2008. She got many offers from various films like Northanger Abbey in 2007, Brideshead Revisited 2008, Chéri in 2009, and The Tempest in 2010.

In 2011, she was a part of the movie Like Crazy which leads her to win different awards. She was featured in a movie, The Theory of Everything in 2014  which made her career strong she was nominated for  Golden Globe, SAG, BAFTA, and Academy Award for Best Actress.

Is Felicity Jones involved in any rumors and controversies?

Talking about the rumors of Felicity Jones, In the movie Star Wars: The Force Awakens, it is regarded as one of the great movies till now. There was a rumor that she might play a live-action version of Hera Syndulla. She is training for the role to make her acting career perfect.

Her hair color is dark brown and her eye color is hazel green.

The beautiful couple, Felicity Jones is engaged to her boyfriend Charles Guard