Felipe Franco is currently possibly single. Previously, he was married to a television star Juju Salimeni. 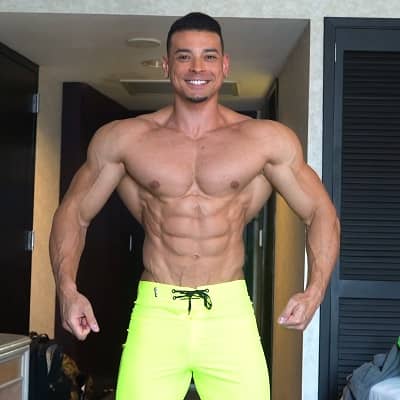 Who is Felipe Franco?

Felipe Franco is a Brazilian bodybuilder and fitness instructor. He is best known as the winner of different bodybuilding contests like the 2016 Europa Dallas and IFBB Men’s Physique.

This athlete was born on 17 May 1982, in Rio de Janeiro, Brazil. His father was also a bodybuilder.

There is no information about his mother, and siblings as he likes to keep his personal life far from the media.

He attended the University Federal of Rio de Janeiro. He belongs to Spanish and Italian descent.

Felipe Franco started doing gym at the age of 17 willing to learn through error and trial. He self-motivated to be the best he can. He is the man one-of-a-kind mindset and work ethic.

Franco decided to pursue the sport full-time as soon as he would finish college. Afterward, he threw himself into the world of competitive bodybuilding.

After much dedication and training, he set out to win the famed Pro Card and earned respect and recognition internationally.

He is also an entrepreneur and works as a personal trainer. Felipe owns many national and international contests including:

Recently, this bodybuilder is also working as a personal trainer and Physical Education Teacher. He recently appeared in his own documentary Felipe Franco: The Chosen One directed by Vlad Yudin.

Franco joined YouTube on 4 August 2014. He has over 1.94 million subscribers with around 173 million views. He posts daily life, travel vlogs, and training on his YouTube channel.

Felipe receives an average amount of $9K-$142K from his YouTube channel. Meanwhile, according to some sources, he has an estimated net worth of $500,000.

Recently, Franco has had a controversy with his ex-wife. His ex-Juju complaint to the police against Franco saying that he broke into her home, and asked for protection from Franco.

After Juju filed a complaint against him, Felipe responded saying that he is calm about the accusation made by his ex-wife.

Felipe Franco is 5 feet 11 inches tall and weighs 88 kg. Similarly, he has black hair and brown eyes. Franco has a shredded and muscular body with fine abs.

He trains 5 days a week and takes two days’ rest. He also takes care of his diet and eats healthy foods to keep muscles shredded.