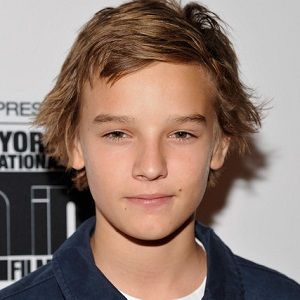 The 20-year-old Scottish actor, Fergus is an unmarried man.  He has never been spotted with any girl in the public and media. Furthermore, he is too young and still fully focused on his career.

As of now, Fergus is totally concentrated in his career and goal and doesn’t want to involve in any relationship stuff. Besides this, there is not even a single rumor of his affair to date. Currently, Fergus is enjoying his life and living elegantly along with his parents.

Who is Fergus Riordan?

Fergus Riordan is a Scottish-Irish actor. He came into the limelight as Danny in the sequel of Ghost Rider, Ghost Rider: Spirit of Vengeance in 2011. Furthermore, he also appeared in a couple of films such as Fragile, I Want to Be a Soldier, and Don’t Grow Up.

Fergus was born on July 22, 1997, in Madrid, Spain. Talking about his nationality, he is Scottish-Irish and his ethnicity is unknown. From the beginning of his childhood, he had a keen interest in acting and also began to appear from a very young age. Concerning his education, there is not any information regarding his educational background.

Fergus began his acting career as Richard from 2005 film Fragile. Later in 2010, he landed the main role in I Want to Be a Soldier. A year later in 2011, he played as a supporting actor in El sueño de Iván. During the same year, Fergus starred as Danny in the sequel of huge hit Ghost Rider, Ghost Rider: Spirit of Vengeance. From the movie, he got huge recognition. Back in 205, he played the role of Bastian in Don’t Grow Up. Additionally, he has also featured in TV series such as Cinema Days and Cinema 3.

Being an actor, he pockets a handsome amount of money from his profession. However, his salary and net worth are unknown.

As of now, Fergus has not won any awards in his career. As of now, he is too young and in the near future, he will definitely grab some awards.

So far, there are not any drastic rumors regarding her personal and professional life. Moreover, he has not faced any controversy in his career to date. It seems he has total focus on his work rather than stuck in any controversy.

Fergus is not active on social media at all. As of now, he doesn’t hold any of these social accounts such as Instagram, Facebook, and Twitter.