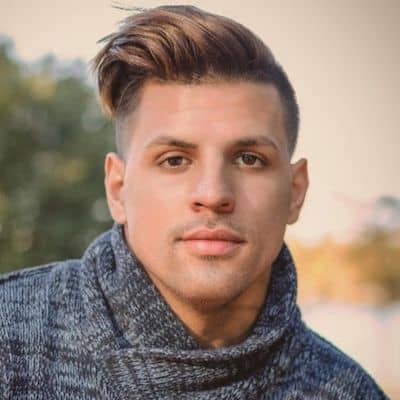 Fessy Shafaat is currently possibly single. He has not revealed his current affair or girlfriend’s derails.

But he was dating a TV star who appeared in Big Brother, Haleigh Broucher. They started their affair in the year 2018 and were together till July 2020.

The reason for their separation was the long-distance and their different backgrounds.

Who is Fessy Shafaat?

Fessy Shafaat is an American reality TV personality. He is known for appearing in the season 20th of Big Brother.

Fessy also competed in American Ninja Warrior and The Challenge. He used to be a substitute teacher.

He was born on 17 Oct 1991 in Orlando, Florida, United States. The name of his father and his mother is Rizvan Shafaat and Michelle Shafaat respectively.

Fessy’s ancestry is Asian and has a brother, Imran, and a sister, Aia.

About academics, he first attended Orlando Lutheran Academy. Then he studied at the University of Tennessee in 2010 and graduated with a degree in psychology in 2015.

He also took communication as a minor subject. His admission to the university was under sports scholarship and he used to play football there.

He was a two-time All American Conference and a three-time All-Southern Conference.

Fessy Shafaat at the University used to play football. He rose to fame after appearing in reality shows. He competed in season 20 of Big Brother in 2000. With him, other 15 celebrities were also in the house.

He came in the 9th position and lasted for 72 days. His other appearances were in Total Madness and Double Agents. In both of the shows, Fessy was one of the finalists.

At present, he has accumulated an estimated net worth of around $500k US. Also, his salary from his TV career is not yet disclosed.

he has founded an app for fitness and titled it Fessy Fitness.

This reality TV star is keeping himself away from rumors plus scandals at present.

Regarding Fessy Shafaat’s body features, his height is 6 ft 5 inches and his body weight is 113 kg. He has dark brown eyes and hair.

Fessy is officially active on social networking sites but not on Facebook.