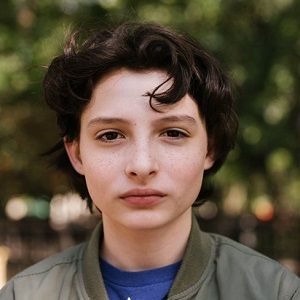 I mean if anyone's comfortable being famous, they're a psychopath

I'd recommend anyone watch 'Harold and Maude,' 'cause it helps a lot with fear of death

If I lounge around for too long, I get really bored. I have to be doing something.

What is the relationship of Finn Wolfhard?

Cute and handsome Finn Wolfhard is only nineteen years old and is an unmarried boy. Also, he is not dating anyone at the moment.

The present relationship status of Finn is single. However, he earlier dated an actress Elsie Richter. The couple first sparked dating rumors in March 2021 after being spotted together.

After a few months, the pair confirmed their relationship that they have been dating in June 2021. They posted a cute now deleted pic where they seemed smiling with each other.

As of now, it is said that Wolfhard and Richter broke up because Richter cheated on him.

Who is Finn Wolfhard?

Finn Wolfhard is a Canadian actor. He is extremely prominent for his role in “Stranger Things” as ‘Mike Wheeler.

He is a hard-working person and has made a recognizable position in the Canadian acting field at a young age.

Finn was born to European parents on 23 December 2002 in Vancouver, British Columbia, Canada.

His nationality is Canadian and belongs to the French-German-Jewish ethnicity. His father is a screenwriter.

Similarly, his father is a screenwriter. He was raised by his parents in a friendly and in the entertaining environment along with his brother named Nick Wolfhard.

Being the son of a screenwriter, he was highly interested in the acting field from a very early age and was dedicated to it.

Also, he got full support from his parents and was enrolled in an acting training center for several months. There is no accurate information published about Finn’s educational status.

Finn made his professional acting debut in the year 2013 and appeared in a film titled “Aftermath” as ‘Young Charles’.

In the same year, he appeared in another independent film titled “The Resurrection”. In 2014, he made his T.V debut and appeared in one episode of T.V series titled “The 100” as ‘Zoran’.

He made his guest appearance in T.V series “Supernatural” as ‘Jordie Pinsky’ in 2015. He has also made several appearances in several music videos including “Retro Oceans”, “Guilt Trip”, and “Sleep In The Heat”.

Finn Wolfhard: Salary and Net Worth

Currently, there are no drastic rumors regarding Finn’s personal and professional life. It seems like he is doing his best job without harming others for which he hasn’t been a part of the controversy yet.

Also, he is so young to be a part of rumors and controversy.

Moving towards his body measurements, he has a good height of 5 Feet and 10 Inches.

His eyes color is dark brown and his hair color is brown. His body weight is 53kg. Besides this, there is no information about his shoe size and dress size.

Meet Dami Hope, The Love Island 2022 Contestant Who Also Happens To Be A Microbiologist!