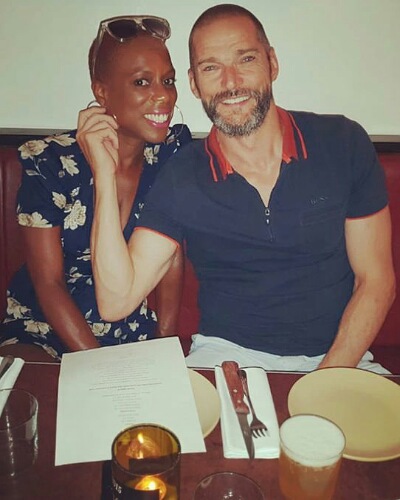 Fred Sirieix and his engagement

The reality TV star, Fred Sirieix, 50 was not successful to get a girlfriend on the show. But he was able to get it himself. Fred announced that he never want has a fiancee and the two will marry soon.

He shared a selfie of himself with his wife-to-be whom he calls ‘fruitcake’. He uploaded this cute photo on his Instagram page and wrote below it:

He followed it with an engagement ring emoji.

Fred and his current fiancee met and started a relationship. It was in January 2018 when they began dating. He had announced his new relationship on his Instagram at that time. Additionally, he had spoken to Fabulous magazine and disclosed his new romance. He revealed:

‘Occasionally, I’ll go for a little wine and some tapas after work with my partner, who I like to call ‘fruitcake.’

‘It’s nice to have a relaxing conversation and chill out when you’ve had a long day. If I do get the chance to be in the kitchen, I love making fresh pasta. I find rolling it out very therapeutic and I get flour everywhere; it’s great fun.’

Fred usually avoids talking about his personal life on social media. But he used to post lovely pictures of their romantic vacations together. And now comes this engagement news.

Prior to this relationship, Fred was dating his ex-girlfriend named Alex. He has two kids with her. And they have split.

Click the link ahead to get more information on Emily Weiss and her boyfriend Will Gaybrick are engaged thanks to coronavirus!

The friends and fans of Fred were extremely elated with the news of their engagement. They took to the social media to offer him their best wishes. The waitress on the popular dating show, Cici Coleman was the first few to wish Fred congratulations. She commented:

TOWIE star Pete Wicks who was Fred’s co-star on the show wrote:

Click the link ahead to read more on Increase in divorce rates due to coronavirus outbreak in China!

One of the fans wrote:

Click to read on Kerry Katona, the singer: her Maldives getaway and the engagement!