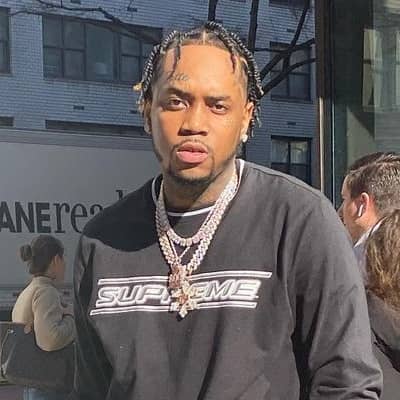 Fivio Foreign is not married yet but he is the father of two children. He has a son and a daughter with his girlfriend Jasmine Giselle. On the 26th of August 2018, Foreign welcomed his first child a daughter named Kay Kay.

Similarly, Jasmine shared a picture of their newborn baby a boy in April 2021 via her Instagram story. On the other hand, Fivio himself has not posted anything about his newborn son.

Talking about their relationship, they have a tumultuous relationship while she was pregnant, the couple was involved in domestic violence that Foreign received allegations of assaulting girlfriend Jasmine in 2020.

Previously, he has been dating Instagram model Sarah Synder.

Who is Fivio Foreign?

Fivio Foreign is an American rapper and songwriter. He is best known for his single “Big Drip” associated with rappers Lil Baby and Quavo. Currently, he is signed to Mase’s Richfish Records and Colombian Records.

Fivio’s real name is Maxie Lee Ryles III. He was born on the 29th of March 1990, in New York City, U.S. He is also known by the name of Lite Fivio.

The rapper has never shared his parent’s and family member’s details in the media. However, it is reported that he was very close to his mother but she passed away in 2018 due to a stroke. Further, his academics details are also under curtains.

Talking about his nationality, he holds American citizenship and belongs to the All-American ethnicity.

Fivio began his music career in the year 2013 when he formed a music collective named “800 Foreign Side” under his stage name Fivio Foreign.

He collaborated with Gino Mondana in the hit single “Like Some Stars”. Similarly, he featured in Alshawn Martin’s song Act Out, Jay Dee’s song Gimmie Dat, and more.

Foreign’s debut EP was Pain and Love released under the record label Foreignside Records in June 2019. The same year, he released his single “Big Drip” from which he gets a break in his career.

Similarly, the music video for “Big Drip” was released in August which was directed by JL Shot That. He signed to Columbia Records in November 2019.

Furthermore, he released his mixtape “800 BC” in April 2020. In May 2020, he got featured on Drake‘s song “Demons” which became his first Billboard Charting single.

Similarly, he is associated with Lil Tjay and Pop Smoke on the song “Zoo York” which charted at 65 on the Billboard Hot 100 in 2020.

There was a rumor that Fivio was reportedly shot and killed outside of an Atlanta nightclub On August 8, 2020. However, producer Kenny Beats later confirmed via Twitter that the rapper was fine.

Recently, Foreign got into a dispute with Fort Lee police in New Jersey on April 21, 2021, and he has been in jail on multiple gun charges.

As of 2021, Foreign has a net worth of $2 million approximately. According to the social blade, he earns in the range of $13.5k to $215.5k per year. Moreover, his salary and other earning are still under review.

The rapper has an impressive height of 6 feet 2 inches tall. Likewise, his weight is about 79 kg. He has brown pair of eyes color with a brown complexion. His hair color is black.

Foreign has several tattoos on his body, one of the tattoos has the name of his first EP around his knuckles. Similarly, he has the street “Lafayette” inked over his right eye.

Foreign has a verified Instagram, Twitter, and Facebook accounts where he has more than 1.3m followers, 343k followers, and 444k followers respectively. He is active on Tiktok with over 402.8k followers.

Furthermore, he has a self-titled YouTube channel with nearly 489k subscribers. On his SoundCloud, he has more than 75.9k followers and around 2 million monthly listeners on Spotify.