Cowboy Flint Rasmussen is a father of two. He is currently single. 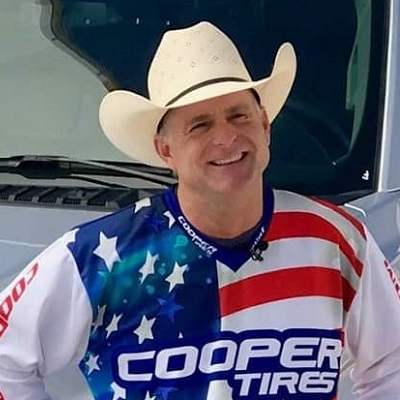 What is the relationship of Flint Rasmussen?

Previously, he was married to Katie Grasky. Together, the couple is blessed with two daughters; Shelby and Paige. At the present moment, he resides in Bozeman, Montana.

Who is Flint Rasmussen?

Currently, he is associated with the Professional Rodeo Cowboys Association.

Flint Rasmussen was born on 25th January 1968 in Montana, United States. He is of Mixed (Danish, Norwegian, German, and Dutch) ethnicity.

He is the youngest child to his parents; Stan Rasmussen (father) and Tootsie Rasmussen (mother). His dad, Stan was a rodeo announcer. He grew up in Choteau, Montana along with three siblings including two brothers; Will and Pete Rasmussen, and a sister, Linda White.

Moving to her academics, he completed his High School education at Choteau High School. In High School, he was active as a football player and track. At the time, he used to be a sports star. Following that, he joined the University of Montana where he completed a double degree with Honors in Maths and History.

At the age of 19, he started his career as a rodeo clown in Superior, Montana to cover his college expenses. After completing college, he returned to Montana and joined the Harve High School as coaching football and track.

At the time, he was also working as the public address announcer of the Northern Montana College’s Basketball games. After working as a teacher for High School for two years, he restarted his career as a barrel man.

Ever since he has been one of the most recognized clowns of cowboy society. Currently, he is signed with the Professional Bull Riders and performs on its events. Also, he held the title the Coors Man in the Can honors for seven years ad PRCA Clown of the Year for eight years.

Besides as a High School teacher, his salary was in the range of $50k or above.

The charming Rodeo clown has blue eyes with grey hair. He has a decent height and weight. However, details on his body stats are not available.

Talking about his appearance, he has a delightful personality with an oval-shaped facial feature. Also, he likes to put on the Rodeo clown hat.