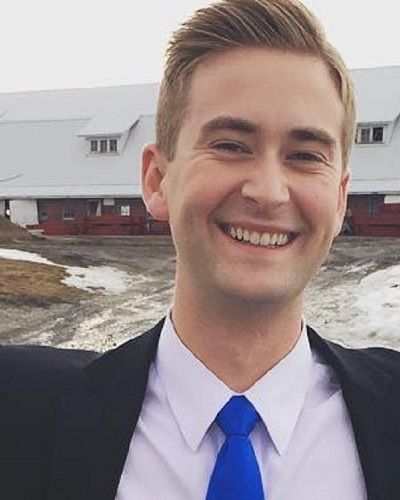 A well-known general assignment reporter Peter Doocy is also recognized as the son of the famous Fox News anchor, Steve Doocy. Peter has two siblings: Mary Doocy and Sally Doocy. Peter made his way to the Fox News Channel through journalism.

He is famous in the journalism sector for his charming and wacky character. Let’s find out more about this handsome journalist here.

Though Peter Doocy revealed that he had a crush on Kate Upton, however, he keeps his personal life under the wraps. He really likes to keep his private life far from the limelight.

As he is unmarried and has no history of a previous relationship, many people speculated him as gay. Still, he has not confirmed his sexuality. Also, his Instagram account is focused on his pictures from the past, his work, colleagues, and immediate family members.

You may like to read Dana Perino; Emerging Go-To-Host Of Fox Channel!!

This indicates that maybe the handsome hunk journalist is single and is focusing on his career. Peter has never disclosed any information about his personal life details, which keeps him in mystery. According to the available details of Peter, he is neither married nor has any kids.

Peter Doocy was born on the 21st of July, 1987 to the famous Fox News anchor Steve Doocy. After his graduation, he followed the path of his father.

Doocy started off his career in New York City. In 2009, he served as a general assignment reporter for the Fox News Channel.

He covered the news like Dick Cheney’s heart transplant surgery, Hurricane Sandy as well as the 2008 and 2012 presidential elections. His work and talent as a reporter are highly appreciated.

Moreover, looking at his career journey, he also covered the Sandy Hook Elementary School shooting. It also became a highly acclaimed work for television. Furthermore, Peter also regularly reported in from Capitol Hill as well as the White House.

Peter is currently a substitute for Fox and Friends, which is his father’s show. As he has a very successful and up-going career, people are more interested in knowing his net worth. His salary is 100 thousand dollars per annum as of now. So, his estimated net worth is a large 500 thousand dollars.

Peter Doocy is an American general assignment reporter, a correspondent for the Fox News Channel. He is also popular as the son of Fox News anchor Steve Doocy.

He became popular since his involvement in the questionnaire asked John McCain about the drinking incident of Hillary Clinton during Chris Matthews’s Hardball College tour. See more bio…

Nidhi Kulpati focuses more in her career since the death of her husband in 2005! Click to know details about her career!!
Tags : Fox Channel journalist