Frances Conroy is an American veteran actress. Frances is married and does not have any kids yet.

Frances Conroy is married to actor, Jan Munroe. They married in April 1992 and have been together since.

He was previously married to Jonathan Furst. They married in 1980 and later separated. 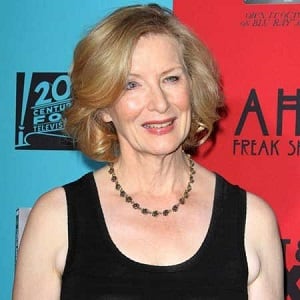 It's actually meditative to sit in a character for an extended period of time, realizing what your relationship is to who you're playing and then letting go, just being there.

Who is Frances Conroy?

Frances Conroy is an American actress. People mostly recognize her for her role as Ruth Fisher in the television series ‘Six Feet Under’.

Additionally, Frances Conroy has appeared in several other movies and television series like ‘The Mist, ‘American Horror Story, and ‘Arrested Development’ among others.

Conroy was born in Wuchang Monroe, Georgia on November 13, 1953, as Frances Hardman Conroy. She was born to parents Ossie Hardman and Vincent Paul Conroy. Conroy became interested in the world of acting in her childhood years. Both of her parents worked in business.

She is of American nationality and belongs to the Irish ethnic background.

Conroy initially performed in several regional and touring theatrical companies. She made her debut in 1978’s TV movie ‘All’s Well That Ends Well’ as Diana.

Additionally, in 1979 she appeared as a Shakespearean Actress in ‘Manhattan’. She played Mrs. Watson in the TV movie ‘The Royal Romance of Charles and Diana’.

Since then, she has appeared in numerous other movies and television series. All in all, she has over 95 credits as an actress.

Some other movies and television series that Conroy has appeared in are ‘Castle Rock’, ‘Young Sheldon’, ‘Casual’, ‘We Bare Bears’, ‘No Pay, Nudity, ‘The Real O’Neals’, ‘How I Met Your Mother’, ‘Royal Pains’, ‘Love Bites, ‘Happy Town’, ‘Love Happens’, ‘The Smell of Success’, ‘Desperate Housewives, ‘The Seeker: The Dark Is Rising’, ‘Broken Flowers’, ‘Maid in Manhattan’, ‘Law & Order’, ‘Crisis Center’, and ‘The Adventures of Huck Finn’ among others.

Conroy won the Golden Globe in 2004 for her performance in ‘Six Feet Under. Additionally, she has also received six Primetime Emmy Award nominations. All in all, she has 4 wins and 23 nominations for various awards to date.

Conroy has not revealed her current salary. However, she has an estimated net worth of around $ 4 million as of 2022.

Rumors were that Conroy will be featured in the Solo Joker movie as Joaquin Phoenix’s mother. She has not been part of any notable controversies in her career.

Talking about her body measurement, Frances Conroy has a height of 5 feet 8 inches (1.73 m). Additionally, she weighs around 67 kg. Furthermore, her hair color is blonde and her eye color is hazel blue.

You may like to read Veteran Hollywood actress Frances Conroy-her eye damage!