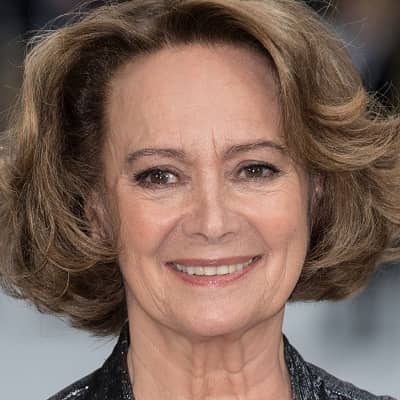 Eat well and sleep well. That will feed your nervous system and your psyche. As you get older, you look how you feel

From 1 till 7, when we moved to England, I spoke only Portuguese. But I can't speak a word of it now

Everything has changed. An interview has become such a confrontational thing. It makes you very defensive.

At the present moment, she is possibly single.

Previously, she was in a relationship with a photographer Patrick Wiseman that began in 1974. They were blessed with three children. She has a son named Andreas Wiseman and two daughters Charlotte and Taran Wiseman respectively. Taran is an actress. Sadly, Charlotte died in 1979.

While she was in a relationship with Patrick Wiseman, Annis had an affair with Hamlet Co-star Ralph Fiennes in 1995. Then after two years in 1997, she broke her 23 years long relation with Wiseman. Not only that, she broke with Ralph Fiennes in 2006.

Who is Francesca Annis?

Francesca Annis is an English actress. She is well known to cinema lovers for her roles in Reckless, Wives, and Daughters.

Francesca Annis was born in Kensington, London in 1945. Now, she is 45 years old.

She is the daughter of an English father, Lester William Anthony Annis, and a Brazilian-French mother, Mariquita (Mara) Purcell. Her parents were occasional actors while her mother used to sing sometimes.

While exploring her early life, her parents shifted to Brazil when she was one year old. They lived six years in Brazil. Later, they returned to England when she was seven years old.

Francesca Annis’s nationality is British and she belongs to mixed(Brazilian, French and English) ethnicity.

Moving towards education, the young Francesca spoke Portuguese. She was schooled at a convent school.

Before studying drama at the Corona Theatre school, she dreamed of becoming a nun but trained as a ballet dancer.

Francesca Annis is one of the top English actresses in England, who have served her life for the English television and Film Industry.

The charming lady with a sophisticated personality has been active in the entertainment industry since she was a teenager. Initially, she began her career as a ballet dancer.

She stepped into the acting industry through appearing in the film The Cat Gang (1959). Her first major film role was Elizabeth Taylor’s handmaiden in Cleopatra(1963).

Annis did theatre. She was cast as the lead with the Royal Shakespeare Company.

Similarly, Annis co-starred with Michael Gambon and Dame Judi Dench as Lady Ludlow in the BBC1 costume –drama series Cranford (2007). In 2015, she played a leading role in the ITV drama Home Fires.

This actress has an estimated net worth of $1 Million. She has not revealed anything about Salary.

According to heart magazine, the rumors were that she used to smoke. However, when asked about the reports she denied them. In Contrast, it has not been confirmed. It appears that they were just untruths and rumors, given that she has always denied it.

This actress has a standard height of 5 feet & 4 inches. She has a bodyweight of 57 kg. She has fair skin with light brown hair. Her eye color is brown.