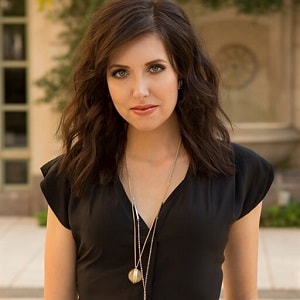 “I’m reminded today how unpredictable God can be.”

What is the relationship of Francesca Battistelli?

Francesca Battistelli married a percussionist, Matthew Goodwin on August 27, 2009, and they have welcomed two sons and a daughter. They are named as Matthew, Audrey, and Isaac. They gave birth to fourth child Wyatt Samuel on October 1, 2017.

Who is Francesca Battistelli?

Francesca Battistelli is an American Christian singer and songwriter from New York City who appeared on Christian radio in 2008. She was also the member of Florida-based all-girl music group Bella at the age of 15. She was nominated at the 2009 Grammy Awards for Best Gospel Performance for the song ‘Free to Be Me’.

She was born on May 18, 1985, in New York City, New York, USA. She has a birth sign Taurus. Her parents also belong to musical theatre. At the age of six, she saw the performance of the musical ‘The Secret Garden’ on Broadway and after that performance, she was motivated to spend her life performing. She wanted to become Mary Lennox in ‘The Secret Garden’. She holds American citizenship but her ethnicity is unknown.

She has been graduated from Lancaster Bible College. Other detail information about her education is not available and it is under review.

Francesca made her tour in the US during early 2008 and she played solo concerts as well as performed with fellow Fervent Records band ‘Big Daddy Weave’. She performed in ‘Spirit West Coast’ in California and Alive Fest.

She came with a single ‘I’m Letting Go’ and it reached No.3 on R&R’s Christian CHR and AC charts during mid to late 2008. ‘Free to Be Me’, which is her next single, reached No.1 on the R&R Christian CHR format in March 2009 and the song remained at the top position for 9 consecutive weeks through the beginning of May.

Francesca Battistelli: Net Worth and Salary

She does not open so much about her personal matter. She has not been engaged in any rumor and controversies regarding her personal life and private life.