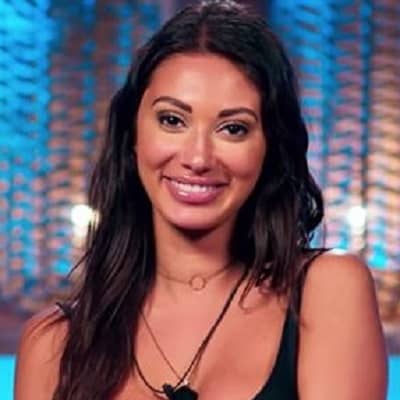 To everyone asking this question and asking to see photos, Demi and I are not together anymore.

Harry and I are not together anymore. He decided to break up with me because he couldn’t do long-distance anymore. I obviously was heartbroken. I did everything I could.

For me, I would have stuck by this person no matter what. Through all the fights and everything, I would have never given up, but it wasn’t reciprocated. He was moving on and he is moving on, and I need to do the same.

What is the relationship of Francesca Farago?

She was dating TOWIE’s Demi Sims but recently she revealed that she is not together anymore with her girlfriend.

Previously, she was in a relationship with Harry Jowsey. He is a famous Youtuber from Canada.

The couple met while on the popular Netflix series, Too Hot To Handle, and began dating the after.

They also have matching tattoos on the inside of their fingers. During the COVID 19 pandemic, Francesca accepted Harry’s proposal over a zoom call.

However, the couple started having differences in their relationship due to long-distance affair. She lives in Vancouver whilst Harry lives in LA. They broke up in June 2020.

Before this, she was said to be dating a popular DJ Diplo. They were also spotted spending their vacation together on the Thailand tour in 2017.

Who is Francesca Farago?

Francesca Farago is a Canadian reality tv star, model, and internet celebrity. She is best known for appearing on Netflix’s hit show Too Hot to Handle.

Furthermore, she along with the other nine contestants became the winner of the show and divided the prize money between themselves.

Who are the parents of Francesca Farago?

She was born on 24 November 1993. Her birthplace is Ottawa, Canada. Her parent’s names are Grant Webb (father) who is a businessman who owns several restaurants, and Lucy Farago (mother) is a writer.

She grew up along with her brother, Mason Webb, and a sister, Katie Webb in her hometown.

Talking about her nationality, its Canadian, and she belongs to Italian ethnicity.

She attended a local school in her hometown. Then she enrolled in Carelton University Law School in Ottawa.

Farago has successfully built her career as a TV star and model now. She rose to fame after being cast on a dating show, Too Hot To Handle. Moreover, the show also became the no. 1 television program airing on Netflix.

The series is a reality television dating game show produced by Fremantle production company, Talkback. The show consists of ten hot singles in one luxurious resort who should not engage in any sexual activity will win a cash prize of $100,000.

The show will comprise eight episodes, all of which will be released on 17 April 2020 on Netflix. Moreover, in every competition, there was always a prize to be won from different games.

Other contestants to participate in the show were Chloe Veitch, Haley Cureton, Harry Jowsey, and many more.

Furthermore, she serves as the brand ambassador of “Swank Makeup“. She has also built her career in modeling. She has done shoots for different brands including LIngerie brands, Fashion Nova, Travel agencies.

How much is the net worth of Francesca Farago?

Francesca has an estimated net worth between $100,000 and $500,000 dollars. She has amassed it from her TV career and through different endorsements deals and promotions.

Other information regarding her salary is not available.

She hasn’t been in an incident that could create any rumors about her. Moreover, this TV star is also not surrounded by any desperate scandals.

Likely, her weight is 55kg (121lbs). She has black colored hair and brown eyes.

She has around 1.8M followers with 27M likes on her TikTok account. Furthermore, She has her own YouTube channel with 290K subscribers.