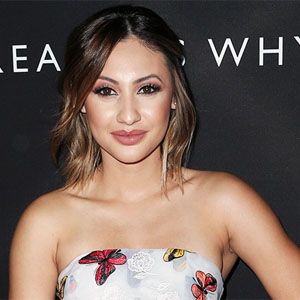 My eyelashes are divas, so they will like a mascara brand one week or for a month, and then they'll just stop working for it. I go back and forth between Maybelline and Cover Girl, and then I carry around a primer, too

I'm glad I went through all the normal teenage dramas that a lot of people go through. I can really relate to 'Secret Life' because I witnessed those similar struggles.

What is the relationship of Francia Raisa?

Francia was in a relationship with hip-hop choreographer Shane Sparks. They started dating each other in 2006 but were still a rumor among the media as there was no public appearance from them.

Their dating rumor was no more rumors when they were seen multiple times holding hands in public. Their three-year relation ended in 2009.

Not long after she breaks up with Shane, she was seen dating American rapper Romeo Miller in September 2010. Their relationship lasted merely two years. The news was official regarding their breakup in August 2012.

She was also rumored to have engaged with Hosea which didn’t work out for long, and they separated two months after the engagement.

Who is Francia Raisa?

She gained popularity for her roles in Steve Rash directed the third installment of the ‘Bring It On series ‘Bring It On: All or Nothing.’

Elegant Francia without a doubt is a multi-talented actress who also hosts the ‘WTFrancia’ on the main stage of the Dashboard.

Francia Raisa was born in the year on July 26 in  Los Angeles, California. Francia is the eldest daughter of mother Virginia Almendarez and father Renan Almendarez Coello.

She attended Bishop Alemany High School where she was a cheerleader. Francia was keen on dancing and acting from a very young age. She was pretty sure about what she was going to do in the future.

Francia was always diligent and vigorous towards what she wanted to do, whether that was dancing or acting.

Raisa’s acting career emerged after she started modeling for commercials ads which attracted makers of sitcoms to hire her as an actress. In her senior year of high school, she began taking acting jobs more seriously.

She started with a small role in the TV series ‘Over there.’ She became a known figure after her role as cheerleader ‘Leti’ in the movie ‘Bring It On: All or Nothing.’

It was only a matter of time until she was offered a lead role in the TV series ‘The Secret Life of the American Teenager’ which made her a familiar face to TV viewers.

This boosted her career and landed her more prominent roles in television and movies. She has been nominated for various awards.

She won the Gracie Allen Award in the category ‘Outstanding Female Rising Star in a Drama Series or Special’ for her performance in ‘The Secret Life of the American Teenager.’

Movies like ‘Beyond Paradise,’ ‘Christmas Bounty,’ ‘Company Town,’ etc. added a generous amount to her net worth. She has currently a net worth of $3 million as of 2022.

Raisa was also rumored to have dated ‘The Hunger Games star Josh Hutcherson.

According to some sources, while she was in a relationship with Romeo, she was also dating American actor Hosea Chanchez with whom she was rumored to have engaged in February 2013.

Francia Raisa and Josh Hutcherson had a rumored encounter in April 2012. She was criticized by the media after suffering a wardrobe malfunction at the 2012 Teen Choice Award.

Francia has a height of 5 feet 3 inches. She weighs 52kg. Her hair color is black and her eye color is dark brown. She has a body measurement of 35-24-36 inches.

Tags : Actress Bring It On: All or Nothing dancer Radio personality

Selena Gomez and Francia Raisa’s Friendship Timeline After She Mentioned Taylor Swift is The Only Friend!

This is How Francia Raisa Reacted When Selena Gomez Said Taylor Swift is Her Only Friend in the Industry!

Selena Gomez Cries Over Her Life Threatening Lupus in Her Upcoming Documentary My Mind and Me!