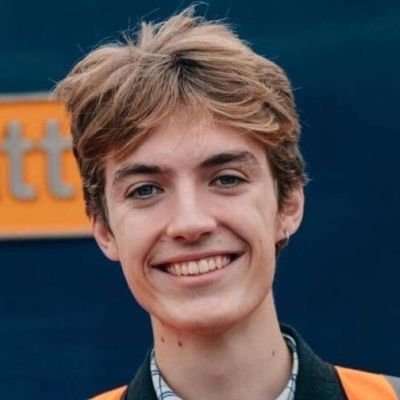 Is Francis Bourgeois Dating Someone?

Reflecting on his personal life, currently, Francis Bourgeois is dating a lady named, Amy Linkin. In March 2022, they walked down the red carpet at the NME Awards in London.

The Mechanical Engineering student wore a pair of grey Capri trousers and a white buttoned-up shirt, while his girlfriend, stepped out in buckle strap shoes, wearing a pair of polka dot tights and a little black dress.

Apart from this, there is no info available on when and how they begin their relationship.

Who is Francis Bourgeois?

Francis Bourgeois aka Luke Nicholson or Nicolson is a popular social media personality and trainspotter. He is famous for his unique content which he shares on his TikTok account,@francis.bourgeois.

As of September 2022, his TikTok account is enriched with over 2.6 million followers.

Similarly, his ethnicity is English while his birth sign is Cancer as per the astrological chart.

Talking about his educational life, he is a graduate of the University of Nottingham, with a degree in engineering.

There is no further detail available about his parents, siblings, and early educational life.

When he was young and studying in school, he got interested in trains. He used to like watching trains, so he used to go to Willesden Junction railway station, and enjoy the train’s view for a long time.

Francis started creating TikTok videos about trainspotting during the COVID-19, pandemic in England. Following in October 2021, he appeared on, This Morning, ITV daily magazine show.

As of September 2022, his TikTok account, @francis.bourgeois is enriched with over 2.6 million followers while altogether he has uploaded around 164 videos.

Most recently on 21 August 2022, he posted a video along with his friend Mike showcasing his model railway. His following video has already earned around 18.4K hearts.

Then in January 2022, he was assigned as the brand ambassador for GB Railfreight.

How Much Is Francis Bourgeois’S Net worth And Salary?

As of 2022, the train enthusiast has an estimated net worth of around $20 thousand. Primarily he earns from social media and modeling.

However, he is yet to disclose his salary and income.

Why Was Francis Bourgeois Alleged To Be Inauthentic?

Once the star was criticized for being inauthentic after his fans started to recognize him in real life. Later, he created a video sharing these allegations in December 2021.

Regardless, Francis has never been part of any serious rumors and controversies.

The young trainspotter stands at the height of 6 feet 3 inches while he weighs around 82 Kg. In addition, his other body measurements including, chest, waist, and hips sizes are not available.

Moreover, his physical features include a pair of light brown eyes and hair of the same color as well.

Being a social media figure, he is very active on social media platforms. Francis owns an Instagram account under the username, @francis_bourgeois43, which has around 1.7 million followers.

On the other hand, As of September 2022, his TikTok account is enriched with over 2.6 million followers.