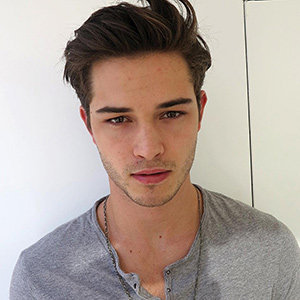 If you want a career, you need commitment.

Reflecting on a personal life of Francisco Lachowski, he is a married man. He married his longtime girlfriend  French-Canadian model Jessiann Gravel Beland on 3 December 2013. The couple has been blessed with two children, Milo born on 25 March 2013 and Laslo born on 19 November 2016. The couple is living a happy married life having no rumor on their separations.

There isn’t any information on him being in other relationships that we know of. His personal life isn’t in the limelight as his career path is. Being a celebrity his stuff is always a matter of concern to general people. Being lack of much information regarding his personal life, his fans are curious to know more about him.

Tall and handsome Francisco Lachowski is a Brazilian model. He is best known as a model who walked the runway for Gucci and Armani.

The son of Roberto and Maria, Francisco Lachowski was born in Curitiba, Parana on 13 May 1991. He was born as the youngest of three children and he grew up with his two sisters Isabella Lachowski and Marcela Lachowski in Foz do Iguacu. He has a Brazilian nationality and has a mixed ethnicity of Polish, Portuguese and German. There isn’t much information regarding his childhood and education.

Talking about career journey of Francisco Lachowski, he started his career path in modeling by competing in the ‘Ford Models Supermodel of the World’ contest held in Sao Paulo. He rose to fame when he won the contest which secured him a $60,000 contract with the agency.

The competition has created him a success in the modeling industry. In 2009, he debuted on the runway for top designers, Gucci and Dior Homme at fashion shows in Milan and Paris. He has opened a show for Ermanno Scervinno and he has walked for numerous fashion shows including Dior Homme, Versace, Dolce & Gabbana, DSquared², Gucci, Roberto Cavalli, Thierry Mugler, Armani. With his success and fame, he has appeared on the covers of several magazines including Vanity Teen, Homme Essential, Carbon Copy, Made in Brazil and Chaos.


In 2015, models.com included Lachowski on their ‘Industry Icons’ and ‘Sexiest Men’ lists. He has appeared in editorials for GQ, V, Vogue, and FHM. He has also appeared in the ad campaigns for DKNY jeans, Lacoste, Armani Exchange, Etro, Dior, DSquared² and Mavi Jeans. His success in career path has paid him well financially. His net worth varies depending on various sources so for now, we can say that his net worth has grown significantly.