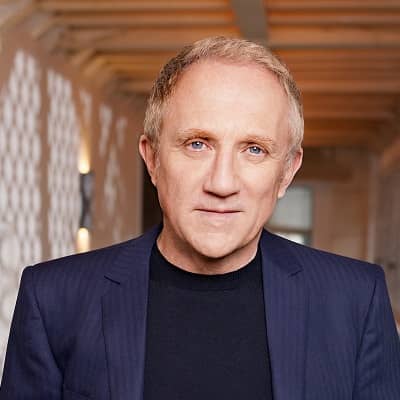 Francois Henri Pinault is currently married to an actress. He exchanged vows with Salma Hayek on 14 Feb 2009. They started to date each other from April 2006 and wedded in Paris.

Again, in April 2009, this couple renewed their wedding vows in beautiful Venice. Together, Pinault and Hayak have a daughter named Valentina. She was born in Sep 2007.

François was previously married to Dorothée Lepère. They wedded in 1996 and has two children named Mathilde (daughter) and François (son).

But they divorced in the year 2006 and after this, he dated a model, Linda Evangelista. Their affair was started in Sep 2006 but broke up in Jan 2006.

However, their son Augustin James Evangelista was born in Oct 2006.

Who is Francois Henri Pinault?

Francois Henri Pinault is a French businessman. He is the current CEO and chairman of a luxury goods company, Kering.

He was born as François Jean Henri Pinault on 28 May 1962 in Rennes, France. Moreover, his mother and his father’s names were Louise Gautier and François Pinault respectively.

He of a French ethnic background. Regarding his academics, he went to HEC School of Management and passed out in 1985.

Francois Henri Pinault is one of the popular faces of the business world. He is associated with Kering which he joined in 2005 as its CEO. He is also serving as a chairman.

From 2003, he is the president of Groupe Artémis which is a parent company of Kering.

He has a house called Christie’s and piece arts made by Picasso, Mondrian, and Koons. Pinault’s family is also the owner of several vineyards. They also own a French soccer club (Stade Rennais F.C.), a theatre, and a luxury yacht.

In the April 2019 fire, the Notre Dame cathedral was destroyed. This family donated an amount of around $109 million for rebuilding.

This entrepreneur’s second wife, Salma was recently faced rumors of marrying him for his bank balance. However, she denies all these rumors.

As per sources, Francois Henri Pinault’s height is 5 ft 7 inches and his body weight is 78 kg. Moreover, the color of his eyes is blue and he has grey hair.