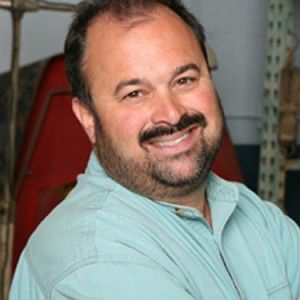 Frank Fritz might be currently single. He has not been linked with any other woman. However, people have begun speculating that he must be in a homosexual relationship with his partner, Mike but both of them have not talked about the speculations.

Who is Frank Fritz?

He was born on October 11, 1965, in Davenport, Iowa, USA. He is currently 54 years old and his birth sign is Libra. His mother’s name is Susan Fritz and his father’s name is Bill Fritz. His father worked in a pharmacy and his mother earned a living as a nanny to look after the other’s children. He grew up alongside his sister in Ohio.

During his early age, he fancied collecting rock along with Mike Wolfe(friend), who also had an interest in antiques. As he grew up, he developed more interest in cars and toys. He along with Mike founded the ‘Antique Archeology’ shop. The shop is located in Iowa’s Le Claire and both of them visited over two hundred cities looking for junks and antiques to refurbish. Also, they sell the refurbished items to the public via their shop.

Frank holds American citizenship but his ethnicity is unknown.

He joined his local high school but declined to proceed to college. He started going about picking unique antiquated items and had an interest in antiques.

He made his breakthrough after he along with his partner, Mike was called to host the ‘American Pickers Show’ in 2010. The shoe became one of the most successful shows and also achieved high ratings. The co-presenters do the normal things in the show like traveling around the country looking for vintage and rare items to refurbish.

The show debut gained more than 3.7 viewers and the show has made the Antique Archeology business more popular with many viewers of the show. Furthermore, the pair founded the Kid Pickers website which is responsible for the renovation and resale of antiques.

Similarly, Frank Fritz has made his appearances in several shows like ‘Who Wants to Be a Millionaire’, ‘American Restoration’, ‘Pawn Stars’, ‘Rachael Ray’, and many more.

It seems Frank has not been awarded and nominated for his work till date.

He has an estimated net worth of around $4 million and he has earned that sum of money from his professional career. In addition, he gets around $300k per season for his show.

There is a rumor regarding his sexual orientation and many people come to the conclusion that he must be gay. But, the rumor has not been confirmed yet.

Also, there is a rumor that he married his longtime girlfriend Jodi Faeth in 2012 but it is still not confirmed.

Frank Fritz has a height of 5 ft. 4 inches and average weight. He has blue eyes and black hair. But, his shoe size, dress size, body measurement, etc. are not available.