Frank Grillo is an American actor. He is known for his roles in films such as Captain America: The Winter Soldier, Warrior, The Grey, End of Watch, and Zero Dark Thirty.

Frank Grillo was married to actress Wendy Moniz since October 28, 2000. They met for the first time in 1996 on the set of Guiding Light, while he was still married.

The couple is blessed with their first son named Liam Grillo in August 2004 and second son Rio Joseph Grillo on January 25, 2008.

But this couple was separated in Feb 2020. They are calling their wedding off after nearly 20 years. Currently, he is dating Australian actress and model Nicky Whelan.

Previously, he dated his girlfriend Kathy and got married to her in 1991. The couple welcomed a son named Remy Grillo in January 1997.

Grillo and his wife divorced in 1998. The divorce might be due to Grillo having an extramarital affair with Wendy. 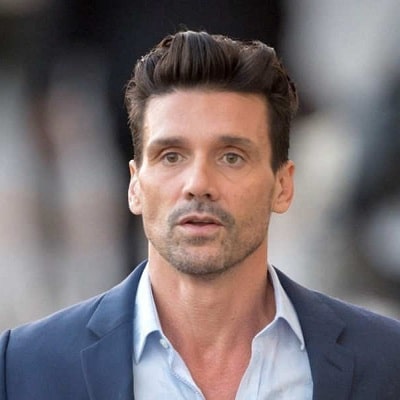 I'm a believer in getting punched in the face. I know it sounds cliched, but to me, fighting is a metaphor for life.

When you have Liam Neeson in a film, no matter how good everyone else is, it's a Liam Neeson film. And if there's wolves, and you're running, it's about Liam Neeson running from wolves.

Being an actor can be a lonely life.

Who is Frank Grillo?

Also, he appeared in the main role in the Netflix film ‘Wheelman’ as a gateway driver.

He was born on June 8, 1965, in New York City, New York, U.S.A. His birth name is Frank Anthony Grillo. He has two other siblings, and he is the oldest.

He has not disclosed any information regarding his parents and childhood.

Frank holds American citizenship but his ethnicity is Italian.

He graduated from high school and then enrolled at New York University and graduated with a Degree in Business.

He began his career appearing in commercials for companies like American Express and Sure deodorant. He debuted his film career with the 1992’s ‘The Mambo Kings’.

As of 2022, he has an estimated net worth of around $5 million. But he has not disclosed his earnings and salary yet.

In 1994, he pled guilty to conspiring to commit securities fraud. Grillo was sentenced to three years probation, six months of home confinement, 200 hours of community service, and ordered to pay a fine of $25,000 and a special assessment of $50.00.

To know more about Meghan Heffern, Staz Nair, and Dreka Gates, please click on the link.