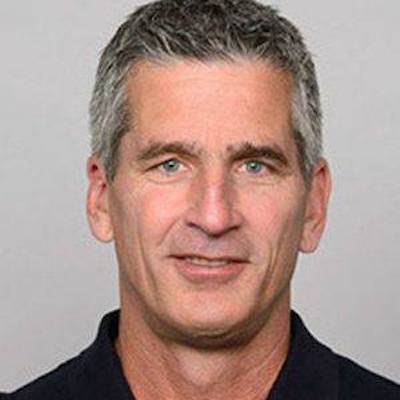 Frank Reich is currently married and is the father of three children. He exchanged vows with Linda Reich but their wedding year is 1986.

They are together since high school and during this time, his wife was a cheerleader.

This couple is blessed with three daughters. their names are Aviry Reich, Lia Reich, and Hannah Reich.

Who is Frank Reich?

Frank Reich an American former football player. He is popular for playing as a quarterback for teams like Buffalo Bills, Carolina Panthers, etc.

At present, he is the head coach for an American football team Indianapolis Colts.

His birthdate is 04 Dec 1961 and he was born in Freeport, New York, the United States as Frank Michael Reich. The name of his mother is Pat Reich and his father’s name is Frank Reich Sr.

His dad is also a football player and played for Penn State.

Frank’s ancestry is German and as per his academics, he went to Cedar Crest High School plus the University of Maryland.

Frank Reich after his college football career entered the NFL with Buffalo Bills. He was selected in 1985 and played till 1994.

He then signed a contract with Carolina Panthers in 1995. In 1996 he was traded with New York Jets. This player then joined Detroit Lions in 1997 and after a year, he got retired.

Frank after playing Football, started to guide other players. he first became a coaching staff assistant for Indianapolis Colts (2008). Then he worked as Quarterbacks and Wide receivers coach for the same team from 2009 till 2011.

He left the team and joined Arizona Cardinals in 2012 as its Wide receivers coach. He was with the team only for a year and went to San Diego Chargers in 2013.

Then, he served the team as Offensive coordinator from 2014 till 2015. Similarly, Frank became the Offensive Coordinator for Philadelphia Eagles (2016–2017).

He then returned to his old team Indianapolis Colts in 2018 as its Head coach.

His net worth is said to be around $10 million US as of 2021. However, his exact salary and other earnings are unknown.

With the team, he is currently involved i.e. Colts is paying him an amount of $4.5 million a year, as per the reports.

This ex-Football player is keeping himself away from rumors and desperate scandals.

Frank Reich’s height is 6 ft 4 inches and his body weight is 95 kg. Similarly, his eyes are brown and his hair color is grey.