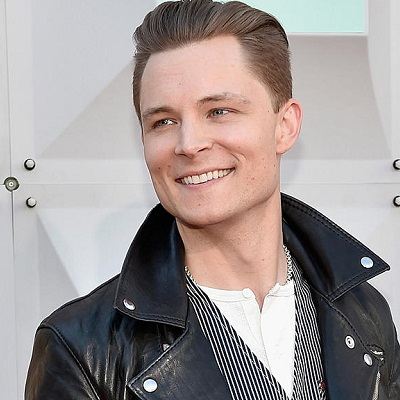 Frankie Ballard is happily married to his girlfriend, Christina Murphy. His wife, Christina is an entrepreneur. She happens to be the owner of the shoe and accessory store, Old Smokeys Boots.

After a long-term relationship, the couple married on the 12th of March 2017 at the Ranch’s Little Chapel in Bee Cave, Texas.

At the wedding, the bride wore the white mermaid gown with a paired jeweled headband and long veil. Where the groom wore the black tux with a matching bow tie. The couple got engaged in September 2016.

Later, on November 7th, 2019, they made announcements that they are excepting a baby. Later, in February 2020, they welcomed their daughter, Pepper Lynn.

Who is Frankie Ballard?

American Frankie Ballard is a singer, songwriter, and guitarist. He is renowned for his County genre as a singer.

Frankie Ballard was born on 16th December 1982 in Battle Creek, Michigan. His birth name is Frank Robert Ballard IV. He is of British-Scottish ethnicity.

He is the second child to his father, Frankie Ballard. Also, he shares a very strong bond with his father. During the father’s day, he shared the pictures of his father. He has two sisters. His younger sister, Breana Ballard is a soccer player by profession.

Moving toward his education, he attended the college, Mott Community College. During his college days, he used to play baseball.

Later, he joined Western Michigan University where he used to play baseball for the National Collegiate Athletic Association.

Despite a bright future in Baseball, Frankie Ballard chose music as his professional career. He came in the limelight in 2008, when he signed and won the Kenny Chesney’s show, Next Big Star Competition. After that, he started performing in Michigan Venues as the show opener for Chesney.

In 2010, he signed with a recording label, Reprise Records, and launched it’s first single, Tell Me You Get Lonely. The single received a very good review from the  Kyle Ward as called the single above the average. Besides that, he songs debuted at the 59th number Hot Country Songs and peaked at the position of 33rd.

Later, in February 2011, he released the single, A Buncha Girls from his debut studio album, Frannkie Ballard. The song peaked at the 27th position in the Hot Country Songs Chart.

Subsequently, 24th of May 2011, he launched bis self-titled album with 8 tracks. The album peaked at the 6th position in the U.S. Billboard Top Heatseekers.

Also, he opened the tour for the country music group, Lady A in the year. After that, in 2013, he released his single, Helluva Life under the recording label, Warner Bros. Nashville.

The single became a bit hit at peaked at the 1st position in the weekly chart of the US Country Airplay. Also, the single received Gold certification from RIAA.

On 10th of June 2016, he launched his 3rd studio album, El Río with 11 tracks. The singles, It All Started With a Beer, Cigarette, and You’ll Accomp’ny Me became the biggest hits of the album.

In the year 2018, he went tour named, Still the Same Concert Tour with the American music duo, Sugarland. Since then he has not released any singles and album. As per his social media profile, he is working on his new album.

As of 2020, he has an estimated net worth of $2 million. His earnings as a singer are in the range of $22k to $208k. Besides that, he also makes through his songwriting.

Apart from that, royalties of his music are in the major source of his income. Besides that, he also makes through his music tours.

Frankie Ballard has blue eyes with brunette hair. He has a decent height and an average height.

Talking bout his appearance, he has a charming persona with oval-shaped facial features. Also, he prefers to be clean-shaved.

As of now, he has managed to maintain distance from any sort of controversy and scandals. Besides that, there are no rumors linked with him.

He also has a self-titled YouTube channel with 63.7k subscribers and more than 43 million views.

You may also read the bio of Daphne Ashbrook, Alan Ferguson, and George Soros.