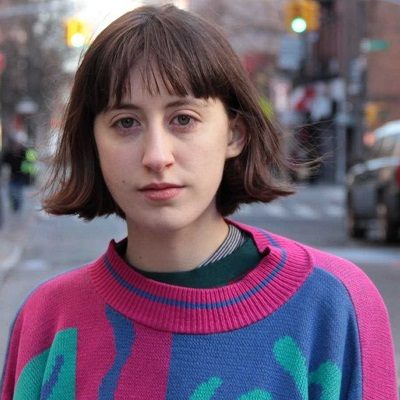 Previously, she was in a relationship with Aaron Maine. He happens to be the Guitarist of the American synth-pop project, Porches. For some time interval, she was also a member of the band.

Who is Frankie Cosmos?

American Frankie Cosmos is a singer-songwriter and musician. She is renowned for her independent singles inspired by Frank O’Hara and New York’s anti-folk music genre.

Next, she will be performing along with her band in Australia including the cities; Fremantle, Bambra, and Melbourne.

Frankie Cosmos was born on the 21st of March 1994 in New York City, New York in a showbiz family. Her birth name is Greta Simone Kline.

Her father, Kevin Kline is an academy award-winning actor. He is of Jewish-Germanic-Irish ethnicity. Also, her mother, Phoebe Cates is a former actress. Currently, she is pursuing her career as an entrepreneur. She is of mixed (Russian-Jewish-Chinese-Filipino) ethnicity.

She has a younger brother, Owen Kline. Owen is an actor by profession. Last, he appeared in the movie, Jobe’z World as Zane.

Talking about his educational background, she completed High School mostly being home-schooled. Later, she attended the Gallatin School of Individualized Study and studied English literature.

However, she dropped out after two years in college as she was frequently touring.

Her very first music talent was first discovered by her family. Inspired by her family, she started learning music and playing instruments including piano and drums. Eventually, she fell in love with the guitar when she was in the 7th grade and settled with the instruments.

Moving forward, Frankie Cosmos started pursuing music as her career. Initially, she started performing and recording independently as Ingrid Superstar. Some of her single at the time includes Adventures, Amnesia the Fifth, Suckups vs. Lovers, and many more.

Moving forward, she started releasing lo-fi recordings under the Bandcamp account. Later, she entered the music community of Purchase College. Through the music community, she introduced herself to the Double Double Whammy record label.

In late 2011, he joined the band, Porches where she used to play Guitar. In 2014, she launched her debut studio album, Zentropy along with Backing band members.

Last, in 2019, she released her latest album, Close It Quietly and Ep, Haunted Items. Apart from singing, she has appeared in music videos like Korean Food, Being Alive, and Is It Possible / Sleep Song.

As of 2020, she has an estimated net worth of $5 million. As a singer, her earnings are in the range of $22k to $208k. Besides that, she also makes through the royalties of her music.

Talking about net worth, her mother, Phoebe has an estimated net worth of $35 million Her net worth is attributed to her career as an actress and entrepreneur.

Frankie Cosmos has blue eyes with brunette hair. She has a decent height and an average weight. However, details on her body stats are not available.

Till the date, she has not been involved in any sort of controversy and scandals that created a buzz in the media. Besides that, she has managed to maintain distance from any type of rumors.

You may also read the bio of Tommy Brown, Joe Walsh, and Rodney Kendrick.