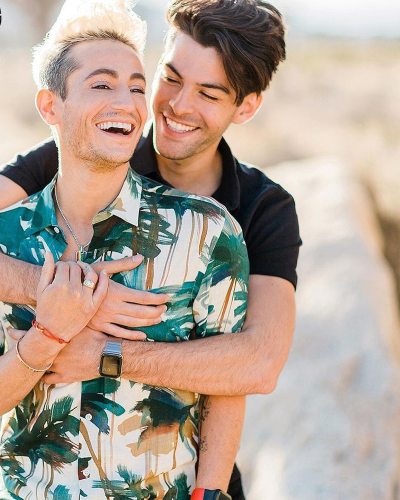 Another wedding for the Grande family! Frankie Grande is officially engaged to boyfriend Hale Leon. He surprised Leon with an elaborate VR proposal on 8th June 2021 night in Los Angeles when they were surrounded by close friends and family. Grande had told Leon that they were meeting up with friends to celebrate his sober anniversary a few days early.

Little did he know that he was going to be proposed by Frankie. He popped up the question at the site Dreamscape where they had one of their memorable dates. The venue was an immersive VR adventure venue in Los Angeles and the Rainbowthon host worked with the company to create a custom ending to the couple’s VR experience. They had displayed ‘Will you marry me?’ message and virtual fireworks.

“It was such a perfect, beautiful moment. Hale was completely surprised and we both started crying tears of joy. I have been working on proposing to him in virtual reality for over a year and it was ABSOLUTELY breathtaking for us both. I can’t wait for everyone to see the video! Omg! We are so happy!”

Also read Courtney Stodden engaged to boyfriend Chris Sheng! When are they marrying?

How did the couple meet each other?

Frankie Grande and Hale Leon met each other three years back in 2019 at a line-dancing bar in Los Angeles. Grande felt love at the first dance at the time when he went to the Oil Can Harry’s in the Valley. He saw Hale dancing as he was performing for everybody.

“It was definitely love at first dance. I chased him down to meet him afterwards but he disappeared to fix his hair.”

The couple ended updating after that. His family adores Hale and his grandmother is very fond of him. Since their first meeting, the couple has been very much in love with each other. Recently, they celebrated their two-year anniversary and took a trip to Palm Springs.

Also read Journey Of Famous YouTube Couple Josh Brueckner and Katie Betzing From Their First Meeting To Their Engagement!

He is the half-brother of popular actress and singer Ariana Grande. Read more bio…