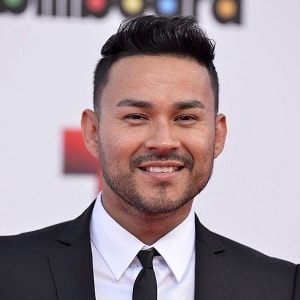 Frankie J married Grace Bautista in 2000. The couple welcomed two children. They have not revealed the names of their kids. The couple is more private about their relationship status.

Who is Frankie J?

Frankie J is a Mexican American singer, rapper, songwriter, and former member of the musical group ‘Kumbia Kings’. His genres include R&B, pop, and Latin pop. He was nominated for Grammy Award for his album ‘Faith, Hop y Amor’ in 2013 for Best Latin Pop Album.

He was born on December 7, 1977, in Tijuana, Mexico. His birth name is Francisco Javier Bautista, Jr. and he is currently 41 years old. He was raised in San Diego, California from the age of two. His uncle brought him and siblings to the United States. There is no information available about his parents, and his childhood. He holds dual citizenship of American and Mexican and his ethnicity is Mestizo Mexican.

He signed the now-defunct Hola Recordings in 1997 and at that time, the Recordings had only one artist signed to the label, Jellybean Benitez. He was known as Frankie Boy and he was a freestyle artist at that time. His music released on ‘3 Maximum Freestyle’ complications but his solo CD was shelved before release.

He became a member of the Kumbia Kings created by the A.B. Quintanilla, brother of Selena in 1999 and performed under Cisko. He signed with Columbia Records as a solo artist. He released his first album ‘What’s A Man To Do’ on May 27, 2003, and his first self-titled first Spanish-language album ‘Frankie J’ in the same year. He made apperance at the Top 10 Billboard Hot 100 hit ‘Suga Suga’ by rapper Baby Bash.

He released his second album ‘The One’ on March 22, 2005, and it was led by the #3 Billboard Hot 100 hit ‘Obsession’ and followed by Top40 singles ‘How To Deal’ and “More Than Words’. ‘The One’ was certified platinum by the RIAA in January 2006 for shipping over a million copies. He came up with his second Spanish-language album ‘Un Nuevo Dia’ on June 13, 2006, and featured the single ‘Pensado En Ti’.

His third English-language ‘Priceless’ was released on October 17, 2006, and it debuted at #30 on the Billboard 200. His second single ‘Daddy’s Little Girl’ charted at number 23 on the Billboard Bubbling Under Hot 100 chart.

He departed from Columbia Records and released a few singles between 2008 and 2011 and started his own label ‘Soulsick Records’. He has written the number 2 hit song ‘take a Chance on Me’ in the UK for boyband ‘JLS”.

He released the album ‘Courage’ on December 7, 2011, and his lead single ‘How Beautiful Yor Are’ on October 24, 2011. He shot a video with Baby Bash for the album’s third single ‘That’s Wassup’ in December 2011 in San Diego, California and the video was premiered on January 8, 2012. He joined Jennifer Lopez and Enrique Iglesias on their joint NortAmericanca tour which was announced on July 12, 2012, and they served as a special guest, replacing Wisin & Yandel.

He signed with Universal music in 2011 and started working on a  new Spanish-language album. His two digital singles ‘Ay, Ay, Ay’ and ‘Tiened Que Creer En Mi’ was released in late 2012.

He released his new studio album titled ‘Eleven’ on July 27, through his own label Soulsick Musick Inc.

At the 16th birthday party of Marissa Michelle on MTV’s ‘My Super Sweet 16’, he appeared as a celebrity guest and joined the ‘mun2’ television series ‘RPM Miami’ as mechanic Ramon in 2011.

He has an estimated net worth of $10 million and his main source of earning is from his professional career. His salary and income are under review.

He likes to be more secretive about his personal information and professional career. He has not been involved in any rumors and controversies.

He has a height of 5 ft. 2 inches and he has got black hair and black eyes.