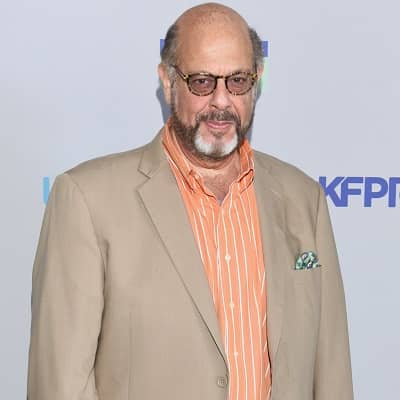 Fred Melamed is a married man and father of twins sons. He is married to Leslee Spieler. However, the details regarding his wife are unknown at the moment.

The couple exchanged the vows on 17th of January 1999. Together the couple is blessed with twin sons however, both of the children were born with autism.

Currently, Fred resides in Los Angeles with having happy conjugal family life with his wife and children.

Who is Fred Melamed?

Fred Melamed is widely known as an American actor, comedian, and writer. He is best known for appearing in the 2009 comedy-drama film, A Serious Man where he portrayed the role of Sy Ableman.

Fred was born on the 13th of May in 1956, in New York City, New York, the U.S. He is of American nationality and belongs to Ashkenazi Jewish ancestry.

Melamed is the adopted son of a New York television producer, Louis Melamed, and an actress Syma (Krichefsky)Melamed. His biological parents are Nancy Zala and Stan Silverstone.

Melamed’s biological father is a British psychoanalyst by profession whereas his biological mother is an actress and director. They were also relatives of the Adler acting family including Luther and Stella Adler.

Further, he received his bachelor’s degree from Hampshire College. He completed his MFA from Yale University in acting.

While attending Hampshire College, Fred started his theatrical career where he appeared in plays like Amadeus on Broadhurst Theatre (1981 to 1983), Relatively Speaking on Brooks Atkinson Theatre (2011), and Uncle Vanya on John Drew Theatre at Guild Hall (2012).

Melamed made his on-screen debut through the television series, One Life to Live where he portrayed the role of Alberto Cervantes from 1981 to 1982. Likely, he made an appearance in a film in the year 1983 where he was cast in the character of Psychoanalyst in Lovesick.

Lately, he has been featured in the 2021 adult animated television series titled F Is for Family as a voice artist for the character of Dr. Erwin Goldman. Melamed’s upcoming computer-animated sports comedy film, Rumble is planning to release in 2022.

In the film, she appeared as a voice artist for the character of The Mayor. Some of his notable film and television series are mention below in the table,

To date, Fred has managed to maintain his clean image. She hasn’t been part of any sorts of rumors and disputes that create headlines in the media.

Fred has earned an impressive amount of fortune throughout his multiple profession as an actress, comedian, and writer. As of 2021, he has an estimated net worth of around $2 million.

According to other online sources, he received around $51 thousand per year. Besides, he hasn’t yet revealed his other assets and real estate.

The actor stands at the height of 6 feet 1 inch tall and his weight is around 78 kg. He has grey hair color with brown pair of eyes. Further, his biceps size is around 14 inches.