Fred Savage is a multiple Young Artist Award-winning actor, producer, and director. Fred Savage is married to Jennifer Lynn Stone and has three children including two sons; Oliver (born: August 2006) and Auggie (born: November 2012) and a daughter, Lily (born: May 2008)

Fred Savage is happily married to Jennifer Lynn Stone. Jennifer is a commercial real estate agent by profession. They have known each other since childhood as they grew up in the same neighborhood.

They were separated from each other in 1988 when Fred moved to Los Angeles from Chicago to work for the series, The Wonder Years.

However, the couple was destined to be each other. They reunited on the 22nd birthday of the actor.

Later, they started dating each other. In September, they took a trip to Italy. During the trip, he proposed her with the 5-carat cushion-cut sapphire. Moving forward, on the 7th of August 2004, they got married to each other.

Together, the couple is blessed with three children including two sons; Oliver (born: August 2006) and Auggie (born: November 2012) and a daughter, Lily (born: May 2008). 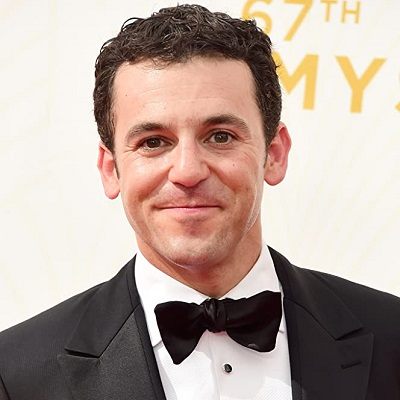 Who is Fred Savage?

Fred Savage is a multiple Young Artist Award-winning actor, producer, and director. Fred Savage is renowned as Kevin Arnold of The Wonder Years and The Grandson of The Princess Bride.

Last, in 2020, he produced the TV series, Single Parents.

Currently, he is filming the TV series, Dash & Lily. Also, his upcoming movie, Untitled Lesile Odom Jr. is in the stage of being post-produced.

Fred Savage was born as Fred Aaron Savage on the 9th of July 1976 in Chicago, Illinois to Joanne (mother) and Lewis Savage. He is of mixed (British-Scottish-French) ethnicity.

His father was an industrial real estate broker. Also, he used to be a consultant too. He spent most of his childhood in Glencoe, Illinois following the Reform Judaism.

Also, he grew up experiencing a diverse cultural heritage as his grandparents. His four grandparents migrated from Poland, Ukraine, Germany, and Latvia to the United States.

He has two siblings including a younger brother, Ben Savage, and a younger daughter, Kala Savage. Both of his siblings are actors by profession. Also, Kala is a music artist.

In 1999, he graduated from Stanford University with Honors in literature. During University, he used to be a member of Sigma Alpha Epsilon.

Before that, he completed his High School education from the Brentwood School in Los Angeles Country.

He stepped into the entertainment industry as a child artist with the series, MorningStar/Eveningstar. In the series, he appeared as a child character portraying the character of Alan Bishop. The same year, he featured the movie, The Boy Who Could fly as Louis.

Apart from the movies, he is also popular for his TV series too. Some of his popular TV series include The wonder Years, Working, Oswald, The Grinder, and Friends from College. Last, he appeared in the series, American Dad! as Tyler.

In 1999, Fred Savage made his debut as a director with the TV series, Working. After the series, he was associated with the series like Boy Meets World, Even Stevens, and That’s So Raven for 2 episodes only.

In 2005, he directed his first TV movie, Stephen’s Life. Some of his popular series as a director include Garfunkel and Oates, 2 Broke Girls, and Modern Family. As of now, he is busy with his upcoming projects as a director.

In 2005, he expanded his career as a producer with the adventure-comedy, Phil of the Future. After that, he produced the series, It’s Always Sunny in Philadelphia.

Some of his production works include the series; What Just Happened? Garfunkel and Oates, and Best Friend Forever.

Fred Savage has brown eyes with black hair. His height is 5 feet 10 inches and weighs around 77 kg.

Back in March 2018, a female crew member of the TV series, The Grinder filed a lawsuit against him and Fox. She claimed that she was subjected to an extremely hostile work environment. Also, she mentioned that the actor verbally harassed the female crew members on the set of the series.

However, he denied the harassment allegations. Also, studio 20th Century Fox Television stated that they have not found any evidence of his wrongdoing.

You may also read the bio of Dan Finnerty, Rochelle Pangilinan, and Natalie Britton.