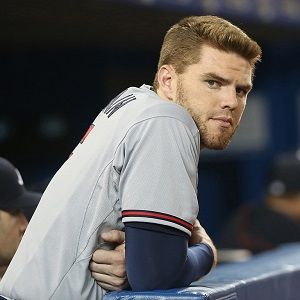 There's nothing I can really do but keep going out there and swinging.

For me, feeling good is line drives to left field.

I think this world needs a little more hugging in their lives.

Freddie Freeman is a married man. He is married to Chelsea Goff. They started dating in the year 2011 and engaged in January 2014. Similarly, they married in 2014 as well. She is a former model who works now in a realtor in Georgia.

Likewise, in September 2016, he gave birth to his first child Frederick Charles ‘Charlie II’. There is no news of divorce between this couple. They are living happily together.

Who is Freddie Freeman?

Freddie Freeman is a Canadian-American professional baseball first baseball for the Atlanta Braves of Major League Baseball (MLB). In the year 2007, he was drafted by the Braves organization and he has been with them since then. Similarly, he made his MLB debut in 2010 and is a three-time MLB All-Star.

He was born on 12th September 1989 in Fountain Valley, California. He is the son of Fred Freeman and Rosemary Freeman. Similarly, his parents are from Ontario, Canada. He has two brothers Andrew Freeman and Phillip Freeman.

Likewise, he holds American and Canadian nationality and his ethnicity is English and Scottish.

Talking about his education, he attended El Modena High School in Orange, California.

The Atlanta Braves selected him in the second round with the 78th overall selection for the 2007 Major League Baseball draft. Similarly, he was the Braves’ fifth-best prospect heading into the 2009 season and the 11th-best prospect overall in their mid-season top 25.

Similarly, he was called up to the Braves on September 1, 2010, as part of the team’s September call-ups and made his major league debut that same day. Later, on September 5, 2010, he got his first career hit off of Florida Marlins pitcher Clay Hensley, and on September 21, 2010, he hit his first home run off of Philadelphia Phillies pitcher Roy Halladay. He began the 2011 season as the starting first baseman for the Braves.

In the year 2012, he had an NL-leading nine sacrifice flies along with batting .259 with 33 doubles, 23 home runs, and 94 RBI in 147 games played. In the year 2013, he was selected as a finalist for the 2013 Major League Baseball All-Star Game Final Vote, where he won with a record-setting total of 19.7 million fan votes, but was unable to play because of a thumb injury suffered three days prior to the game.

Likewise, he won the Golden Glove Award and First Basemen Award in the year 2018. He received Wilson Defensive Player of the Year Award in 2018.

Similarly, the breakdown showed that he earned $5.125 million in the 2014 season when he signed the deal and a higher stake of $8.5 million in the year 2015. By the year 2016, he went a lot higher as he continued to impress, earning $12 million for his excellence.

There is no any big rumors and controversy of Freddie Freeman. He is successful in maintaining his life away from rumors.

Freddie has a height of 6 feet 4 inches and his weight is 103 kg. Similarly, his hair color is blonde and he has blue color eyes.