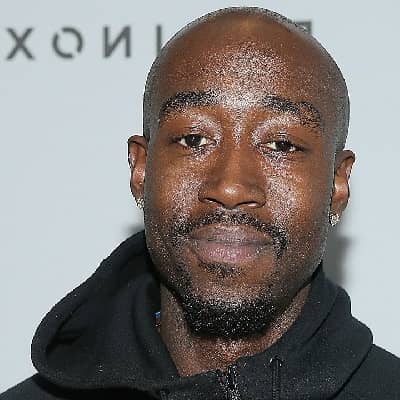 Freddie Gibbs’s current relationship status is Possibly Single. Currently, he is focusing on his career rather than being in a romantic relationship.

Previously, he was engaged with Erica Dickerson who is an actress and the daughter of Hall of Fame NFL running back Eric Dickerson. The rapper proposed to Erica at their baby shower in March 2015.

The couple was blessed with a child a daughter, Irie Gibbs on April 26, 2015. However, the couple became apart from each other and has since called off their engagement. Also, Eric takes custody of their daughter, Irie.

Moreover, no details available regarding his past relationship.

Who is Freddie Gibbs?

Freddie Gibbs is an American rapper and songwriter. He is best known for being one of XXL Magazine’s ten freshmen of 2010.

The rapper was born on June 28, 1982, in Gary, Indiana, United States. He raised at the 17th and Virginia St. on the city’s east side. As of now, he is 39 years old. He holds an American nationality and belongs to the All-American ethnicity. His Zodiac sign is Cancer. He is better known by his stage name Freddie Gibbs but his real name is Fredrick Jamel Tipton.

Freddie stated that his father and Michael Jackson were the same age and they were known in Gary as the two kids who could sing. However, her parent’s and sibling’s names are unknown.

He attends Ball State University where he played American football on an athletic scholarship but was eventually expelled from college. At the age of 19, he enlisted into the U.S Army as a part of a pre-trial diversion program when he was on trial for theft and gun charges but was dishonorably discharged only eight months later after being caught smoking marijuana.

Freddie began pursuing a rap career after he met local hip-hop producer Finger Roll, where he joined Finger Roll’s No Tamin Entertainment crew. In 2004, he released his first project, a mixtape titled Full Metal Jackit. At that time, he was signed to Interscope Records and began working on his debut studio album, but was dropped from the label in late 2006.

In 2011, he signed to Young Jeezy’s record label CTE World. In October, he released the mixtape Cold Day in Hell, which featured guest appearances from Young Jeezy, Juicy J, and more. On December 11, 2012, he left Young Jeezy’s CTE label.

On May 27, 2013, he released his debut album ESGN which peaked at #17 on the US Rap charts. Likewise, on March 18, 2014, he released a collaborative album, Piñata, with record producer Madlib. On November 20, 2015, he released his second solo studio album, Shadow of a Doubt.

In 2020, Gibbs, together with hip hop producer The Alchemist, released an album titled, Alfredo. Besides, he also appeared in several TV series, including Power, The Cave.

In 2016, Freddie faced rape charges after a woman accused him of sexually abusing her in Austria. Later, he acquitted on all charges for lack of evidence.

Freddie earned most of his wealth throughout his profession as a rapper and from albums. In addition, he has a Youtube channel too. His estimated net worth is around $2 million.

The rapper is 5 feet 6 inches tall approximately and his weight is around 65 kg. Likewise, he has brown eyes color.

The rapper is active on Twitter with the handle Skinny Suge where he has over 415.6k followers. Also, his Twitter account is verified. He has also a Youtube channel with the handle Freddie Gibbs which has over 268k Subscribers.