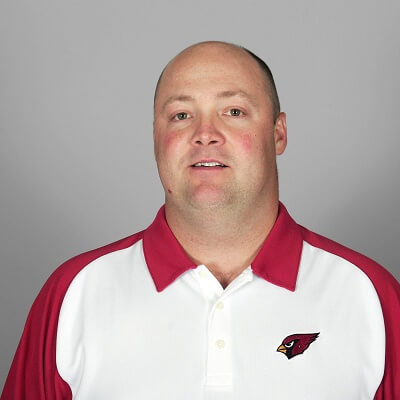 Source: Revenge of the Birds

Freddie is a married man. He is married to Ginger Kitchens. The couple met when they were in the University of Alabama. A few weeks after meeting for the first time, Freddie asked her out but she rejected him. She had a boyfriend and Freddie also started dating other girls.

After around two years, she dumped her boyfriend and the couple started dating. She was not interested in football which Freddie liked. After dating for some years, the couple got married in 2000 and have now been married for around two decades.

From their marriage, the couple has two beautiful daughters, Bennett, and Camden.

Who is Freddie Kitchens?

Freddie Kitchens is an American football coach who currently serves as the tight ends coach for the New York Giants of the NFL. Previously, he has served as the head coach of the Cleveland Browns.

He has two siblings, a brother named Jason Wayne Kitchens and a sister, Emily Lauren Kitchens. He spent his childhood days in Gadsden with his siblings. His ethnicity is Caucasian.

Talking about his educational background, he went to Etowah High School. After that, he joined the University of Alabama. He played for the University’s football team, the Alabama Crimson Tide from 1993 to 1998.

After his playing college career, Freddie Kitchens became an assistant coach for several college teams before finally landing his first job in the NFL. He joined the Dallas Cowboys as a tight ends coach in 2006.

The following year, in 2007, he joined the coaching staff of the Arizona Cardinals. He served there for 11 years and coached in multiple positions including quarterbacks, tight ends, and running backs.

In 2018, he left the Cardinals to join the Cleveland Browns. On October 29, 2018, the Browns fired Hue Jackson, the head coach, and Todd Haley, the offensive coordinator. Kitchens replaced Haley as the offensive coordinator. The Browns improved significantly and finished the season strongly. Kitchens got praise for coaching Baker Mayfield and for improving the Browns’ offense.

On January 12, 2019, Kitchens became the head coach of the Cleveland Browns. His first game was a loss to the Tennessee Titans After a bad season and a shaky start to his career as the head coach, the Browns fired him in December 2019 after just one season as head coach.

However, Freddie would not be jobless for a long time. After about a month, in January 2020, the New York Giants hired him as their tight ends coach.

Freddie Kitchens has an estimated net worth of around $300k. He has not revealed his salary as the tight end coach of the New York Giants. However, on average, an NFL assistant coach earns around $400k per year.

Kitchens has black hair and his eyes are green in color. The height of Freddie kitchens is 5 ft 7 inches and weighs 76 kg. He has not revealed his other body measurements.

Freddie has not been involved in any controversies. He has been able to keep himself away from any type of controversy and scandal. So far, he has not done anything controversial in his career. Similarly, there are no rumors about him.

Kitchens has preferred to stay away from social media. He is not active on social media sites.

You may also like to read the Bio, Career, Net Worth, Body Measurements, and more about Baker Mayfield, Lincoln Riley, Dave Wannstedt, and more.