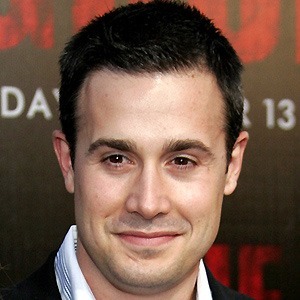 Personally, when things upset me, I get quiet and closed off. I have nothing to say, and a chill sets in while I think about what's going on.

Life is not about making dough or how many movies you can make in a year. It's about finding someone that you can share things with.

Living life at a young age is like being a sponge thrust into the ocean. You absorb what's around you. If you're around people who are supportive and positive, that's how you look at the world.

Freddie Prinze Jr. is a married man for a long time. He is married to the famous American actress Sarah Michelle Gellar. After a few years of their affair, the couple got married on 1 September 2002.

The couple together has two children named Charlotte Grace Prinze and Rocky James Prinze. Freddie and Grace have been married for over 14 years now and their relationship is going very well.

Before getting married, Freddie was in a relationship with the beautiful American actress Kimberly McCullough from 1996 to 1999.

Who is Freddie Prinze Jr.?

He is also famous for his portrayal of Zachary Siler in the 1999 film She’s All That and Fred Jones in Scooby-Doo (2002) and its sequel, Scooby-Doo 2: Monsters Unleashed (2004).

Freddie Prinze Jr. was born on 8 March 1976, in Los Angeles, California, USA. His birth name is Freddie James Prinze. He is the only child of actor-comedian Freddie Prinze and real estate agent Katherine Elaine Barber.

His father died due to a self-inflicted gunshot wound when he was less than a year old. He grew up in Albuquerque, New Mexico. He was raised Roman Catholic.

Freddie graduated from La Cueva High School in 1994. After graduation, he moved to Los Angeles to audition for television roles. His nationality is American and he is of Mixed (Puerto Rican, German, Irish, English, Scottish, Austrian, Swiss-German) ethnicity.

Freddie Prinze Jr. has been an active member of the film industry since 1995. He made his acting debut with a guest role on the ABC TV series Family Matters in 1995. Freddie then appeared in a few programs and TV movies. He made his motion picture debut as Joey Bostin the film To Gillian on Her 37th Birthday in 1996.

In 2002, Freddie played Fred Jones in the live-action film version of the popular cartoon, Scooby-Doo. He later reprised the role in the 2004 sequel, Scooby-Doo 2: Monsters Unleashed, both alongside his wife Sarah Michelle Gellar. Since 2014, he voices the character Kanan Jarrus in Star Wars Rebels.

He began making appearances in the game show First Impressions since 2016. He has a net worth of 19 million dollars, but his salary is unknown.

Freddie Prinze Jr. has a height of 6 feet 1 inch and his weight is unknown. His hair color is black and eye color is dark brown. Moreover, his shoe size is unknown.

Sarah Michelle Gellar Opens up about her Experience with Postpartum Depression: ‘I Made It Through!’