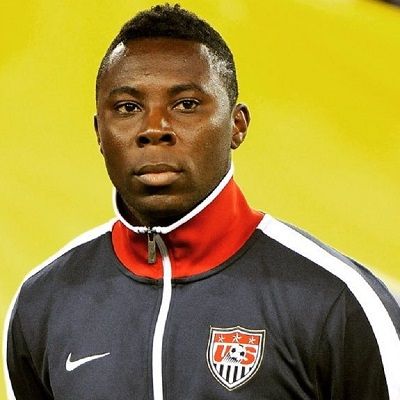 I wanted to get us a place of our own with a little bit more space. The kitchen is just huge, because my mom... lives there, man, and she loves being in the kitchen

My mom was always the supplier of soccer balls, and so people were always knocking on my door, and trying to get me out so we could play

They have been together since April 2008.

Previously, he dated Keisha Buchanan. Keisha is a British singer and they were together in the year 2000 and dated for three years.

Also, he dated American singer Jojo in the year 2005 and were together for a year.

Who is Freddy Adu?

Freddy Adu is an American soccer player. Freddy is one of the youngest Americans to sign a Major League professional contract.

Fredua Koranteng “Freddy” Adu was born on 2nd June 1989 in Tema, Ghana. His parents are Maxwell Adu and Emelia Adu of Ghanian-American heritage.

When he was eight, his mother won the Green Card Lottery so his family moved to Rockville, Maryland, United States.

He has a brother Fro Adu.

He attended Sequoyah Elementary School in Derwood, US. After that, he attended a private school, The Height School in Potomac, Maryland.

Freddy became the youngest American ever to sign a Major League professional contract in any team sport- he was just 14-years old!

He was chosen by D.C. United as the number an overall pick in the 2004 MLS SuperDraft.

Adu wanted to play close to home, so on 18th November 2003, he was assigned to D.C. United and became the first player selected in that draft. On 3rd April 2004, he was on United’s first game of the season against the San Jose Earthquakes.

When he was 14 years old, he scored his first professional goal in the 75th minute of a 3–2 away loss against the MetroStars.

Likewise, he was also captain of the U-20 United States men’s national team in the 2007 FIFA U-20 World Cup.

On 30th July 2007, Benfica issued an official statement that he has been transferred from Real Salt Lake to  Benfica, a professional football club based in Lisbon, Portugal.

He debuted on 14th August 2007 against Copenhagen in a UEFA Champions League qualifying match.

He joined the French club AS Monaco in July 2008 on a season-long and signed a 12-month deal with Greek side Aris.

Similarly, he returned to MLB in August 2011, signing with Philadelphia Union and on 13th August played a match against FC Dallas.

On 5th April 2013, he joined Bahia of Brazil but he left on the 7th of November.

On 5th July 2014, he signed a 1.5 years contract with Jagodina and was released on 21st December.

After that, on 28th March 2015, he signed a one-year contract with KuPs. On 14th July 2015, he was signed by Tampa Bay Rowdies which was his 12th professional club.

For the 2018 season, he joined Las Vegas Lights FC.

He promotes NIKE and endorsement deals which earned him $1 million US.

He has dark hair and black eyes. He is 5 feet 8 inches and weighs around 64 kg.

‘You may also read the age, parents, career, net worth, body measurements and social media of Alex Morgan, Omar Gonzalez, and Jane Campbell