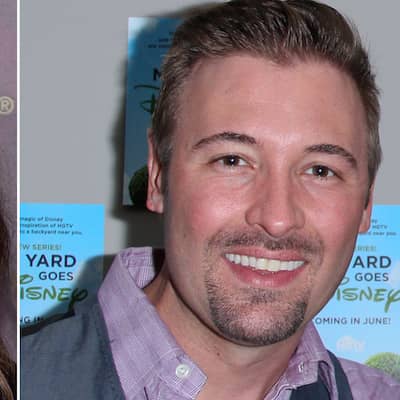 Freddy Harteis’s relationship status is taken. He is living with his girlfriend Linsey Toole. The details of their affair are known but she has announced her pregnancy after Freddy’s separation from his wife.

Previously, Freddy was married to Jeannie Mai Jenkins. They exchanged vows on 11 Aug 2007 and were together for around 10n years.

But they split in Oct 2017 and announced their divorce. The separation was finalized in Dec 2018. The reason for parting away was Jeannie accusing him of cheating and their long-distance relationship.

Who is Freddy Harteis?

Freddy Harteis is an American actor and producer. He is famed for appearing in The Maverick (2019), The Hollywood Hunter (2011), Holiday Fabulous (2011), and more.

He is mostly known for being the ex-husband of television presenter and make-up artist, Jeannie Mai.

He was born as Fredrick Scott Harteis on 12 May 1976 in Colorado, the United States. The name of his mother is Linda and his father is Fred.

Freddy’s ancestry is Caucasian and talking about his academics, the data is not yet revealed.

Freddy Harteis as a producer has produced a 2019’s TV series The Maverick. He also acted in it and was a host. He was seen in  The Real (TV Series) as himself.

It is an American talk show and as of 2021, it has seven seasons. In 2011, Freddy appeared in Holiday Fabulous a TV Special, and The Hollywood Hunter, TV Series.

At present, it is said his net worth is around $2 million. However, his salary and other earnings are unknown.

This star actor is keeping himself away from rumors and is also not surrounded by any desperate scandals.

Regarding Freddy Harteis’s body features, his height is 5 ft 10 inches and his body weight is 75 kg.

Moreover, his eyes are blue and his natural hair color is brown. His chest is 40 inches with a waist of 30 inches. He wears a shoe size of 9 US and his biceps are 14.5 inches.

How did Jeezy propose to Jeannie Mai! How is Jeannie spending her quarantine?