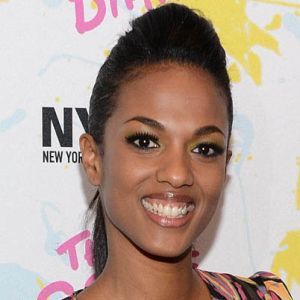 I can't believe how it has just exploded over here. When I was doing the show, we didn't get to come over to America and do any of the promotion. The new lot [of Doctor Who actors] did, but my agent said, 'Don't worry, whatever happens with them, it kind of ripples outwards and the whole family reaps the benefit of that', so it's been great for my career.

Moving towards her confidential life, she is in the relationship with an actor Luke Roberts. Though she had turned 39, still she hasn’t married. The couple were seen together on many occasions, they linked together.

Earlier, she had a rumor that she was married to her husband, Noel Clarke. But there was not any verified clue about their marriage and also their wedding ceremony.

Who is Freema Agyeman?

Freema Agyeman is an actress, singer as well as a model. Her real name is Frema Agyeman and belongs to the British community.

She has played in numerous film and some of her famous roles are Martha Jones in the BBC science fiction series Doctor Who and its spin-off series Torchwood as well as an Amanita Caplan in the Netflix science fiction drama Sense8.

Additionally, she had also made her US television debut on The CW’s teen drama The Carrie Diaries as Larissa Loughlin in 2013

. She had also gazed on the television shows include Old Jack’s Boat, Silent Witness, and Survivors. Agyeman had also appeared as Penny in the movie North v South in 2015.

Freema Agyeman was born on 20th March 1979 in London, England. She was born in the family of Agyeman where his father  Osei, is Ghanaian and her mother Azar, is Iranian.

But her parents separated when she was young. She has an older sister, Leila, and a younger brother, Dominic. Besides this, she hasn’t mentioned the information about her childhood on the social sites.

Furthermore, she had attended Our Lady’s Convent RC High School. Then, she had joined the Anna Scher Theatre School in Islington. In 2000, she had graduated in the field of drama and arts from Middlesex University.

Moving towards the professional life, she had begun her career since 2001. This year she had played famous television role was playing Lola Wise in the revived series of ITV soap opera Crossroads.

She has also played a guest role in other TV series such as Casualty, Mile High and The Bill. Then, she had played as Mary Ogden, a scene of crime officer, in an episode of Silent Witness in 2005.

The next year, she had auditioned for three roles in the series of Doctor Who. She had also surveyed dance and practised horseback riding, martial arts and gymnastics in order to provide physically burdensome action scenes in the same year.

Subsequently, in 2007, she had returned to the series along with several other former cast members to mark David Tennant’s final appearance at The End of Time. She had also appeared in three episodes of series 2 of Doctor Who spin-off Torchwood, namely “Reset”, “Dead Man Walking” and “A Day in the Death” in the same year.

Then in 2008, she had materialized several times on The Bedtime Hour on CBeebies reading the story broadcast shortly. The same year, she had appeared in Little Dorrit, as it had always been a dream of hers to appear in a period drama.

The next year till 2012, she had starred as Crown Prosecutor Alesha Phillips in Law & Order: the UK, a UK adaptation and spin-off from the US Law & Order franchise. And announced that she would play as Larissa in the pilot of Sex and the City prequel The Carrie Diaries in 2012.

Likewise, she had starred in the CBeebies television series Old Jack’s Boat as Shelley in 2013. In 2015, she had appeared in the Netflix series Sense8.

Moving towards her, awards and achievements, she had won many of the awards in her up till now career life. She has won “Best Newcomer”, “Glamour Women of the Year Awards” and People’s Choice category for “Female TV Star”.

Freema Agyeman: Salary and Net Worth

Through her hard work in her professional life, she has earned the net worth of $4 million. But she hasn’t mentioned about her salary.

Her recent activities say that she was engaged but it turned into rumors which were denied. She had also said that she had stayed in a relationship for the first time ever, but had never been a massive marriage fan.

Freema Agyeman has a height of is 5 feet 3 inches and weighs 54kg. Her body measurement is 34-25-35 inches and her bra size is 34(B). She has black hair color and black eyes.