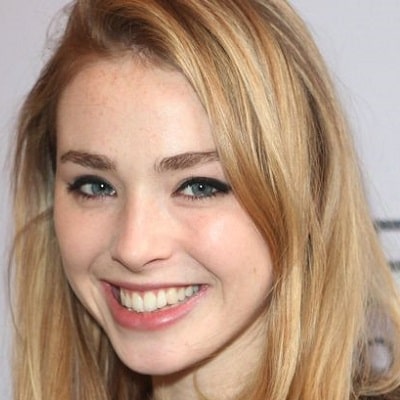 I always find that I'm less sarcastic in France and maybe I'm a bit more shy and a bit more reserved, even more polite. My voice tends to go up quite a lot. I'd love to speak more languages just to discover who I become in a different language

That film, I mean "The shining" got me thinking about the way of telling stories and how effective it can be and how it can really shape people and move people to such a degree. It got me questioning storytelling

I've always been so intrigued by French language and how it completely changes you, because of cultural context, because of humor.

She loves to play the piano and also speaks French fluently.

Who is Freya Mavor?

Freya Mavor is a Scottish actress and model.

Her father is an award-winning playwright who leads the MA screenwriting course at Napier University, Edinburgh, Scotland and her mother was a singer with Scottish Opera for 15 years.

She grew up in Inverleith, Edinburgh, alongside her two brothers, Hugo and Alex.

She studied at Collège Eugène Fromentin in La Rochelle and at Mary Erskine School in Edinburgh.

She began her acting career in the theatre and developed her acting skills before hitting the bigger screen.

She auditioned for Skins after hearing on a bus that people were talking about the show.

In 2011, she made her professional debut in the fifth and sixth series of the E4 drama, Skins.

In 2011, Freya became the face of Pringle of Scotland for its 2011 spring/summer campaign.

She made her appearances in several TV shows and movies, including Not Another Happy Ending, Casting(s), Modern Life Is Rubbish, The ABC Murders, and Twice Upon a Time, amongst others.

In 2017, she depicted a supporting role in the mystery drama The Sense of an Ending.

She won the Fashion Icon of the Year Award, 2011 by the Scottish Fashion Awards.

She was nominated for 2012’s Best Actress at the TV Choice Award.

Moreover, she became the Screen International Star of Tomorrow, 2013.