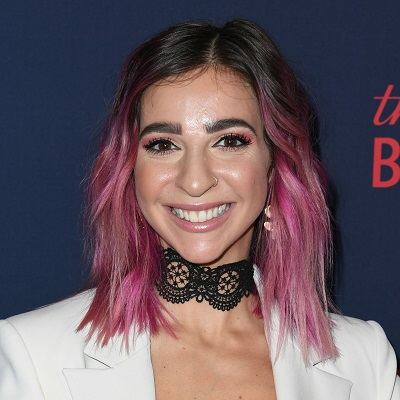 “everyone’s asking if i’m feeling okay. the truth is i’m always feeling this way. i’m just having a hard time disguising it today.” “I don't fear death. I fear the end of all my thoughts and dreams That will disappear into nothingness when I die.” “are you happy, or are you not sad?”

Gabbie Hanna is in a relationship with Payton Saxon. He is photographer by profession.

They started dating in 2019 and happy with each other. Before the relationship, she used to joke about her relationship that was single.

Who is Gabbie Hanna?

American Gabbie Hanna is an Internet Sensation, actress, and music artist. She is renowned for Vlogs and vine on her YouTube channel with more than 5.54 million subscribers.

Last, in 2020, she launched her second book, Dandelion.

Gabbie Hanna was born on the 7th of February 1991 in New Castle, Pennsylvania. His birth name is Gabrielle Jeannette Hanna.

Her mother, Michelle Hanna is a licensed therapist. Her father, James Hanna is of Lebanese-Polish-French ethnicity. She has six siblings including five sisters, Cherisa, Monica, Cecilia, Genny, and Masdelynn, and a brother, Sam.

In 2013, she earned her bachelor’s degree with Honors in Psychology and Communication from the University of Pittsburgh.

Currently, Gabbie Hanna is one of the most popular personalities on the platform with more than 5.54 million subscribers and 1 billion views.

She started her journey as a YouTuber back in February 2014. Before that, she was associated with the Vine app where she had more than five million followers. First, she started her channel with the name The Gabbie Show. Later, in 2017, she changed the name to Gabbile Hanna. Most of the content of the channel is vlogs, and other fun and emotional videos.

Later, she started her second channel which has more than 1.5 million subscribers with 198 million views.

After a successful career as a YouTuber, she tried her luck in the film and music industry. In 205, she debuted on TV via the series, Dance Showdown. Later, she appeared in series like Jake & Hudson and Escape the Night.

Besides that, in 2019, she launched her first single Medicate. The single peaked at the 31st position in the US Billboard. Later, in May 2019, she released the extended play, 2WayMirror. With such hits, he became the Top 5 emerging artist in Billboard.

In 2017, she launched her first book, Adultolescence. Moving towards, in 2020, she published her second book, Dandelion which is based in the poetry genre like her first book.

Besides that, she also co-hosts various events like the 2017 MTV Video Music Awards and Total Request Live.

On the 23rd of January 2010, she posted a video with the title Transforming into TikTok E-girl. For the video, she received criticisms as she used the one picture she used in her video as an E-girl was murdered. Also, the comment section of the video was flooded with discouraging comments like Can you turn into a decent human being?

For that, she neither spoken anything in the matter nor took down the video from her channel. However, she has blurred the face of the victim in the video in recent days.

Most recently, she deleted all the videos that include the YouTuber, Shane Dawson. In the reason days, Shane is facing a huge problem for his previous videos’ blackface in several videos and the use of the N-word.

Gabbie Hanna is a brown-eyed brunette. However, she prefers to experiment with her hair colors and has already tried the colors from blonde to pink.

You may also read Abby Roberts, Salice Rose, and Heir of Atticus.