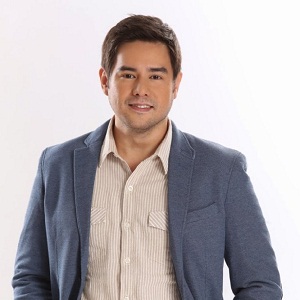 Gabby Eigenmann is a married person. After being in a relationship with Apples Arizabal-Eigenmann since 1997, they finally got married.

Currently, he is living happily with his wife and children in the Philippines.

Who is Gabby Eigenmann?

Gabby was born as Gabriel John C. Eigenmann on March 2, 1978, in Makati, Philippines. He belongs to Asian ethnicity.

His father and mother were Mark Gil and Irene Celebre who both were actors.

Nothing is published about his educational background. However, he has attended OB Montessori to study Hotel and Restaurant Management but never completed it.

Gabby debuted in T.V in the year 1989 and appeared in a T.V show titled “Palibhasa Lalake” as a host and performer. From 1995 to 1997, he was associated with ASAP show as a performer.

He made his film debut in the year 1997 and appeared in a film titled “Sa Kabilugan ng Buwan” as ‘Ricky’. In the year 2006, he was featured in the main role of ‘Allan’ in a T.V show titled “Now and Forever: Duyan”.

Gabby is also a talented singer. He has released two albums. His first music project Loving came out in 2001.

Then after five years, in 2006, he gave the public his second music album Sa Di Kalayuan.

There are no drastic rumors regarding Gabby’s personal and professional life. It seems like he is doing his best job without harming others for which he hasn’t been a part of desperate controversy yet.

This talented actor plus singer has an estimated net worth of $500 thousand.

As per reports, the average salary of an actor is around $19k-$210k per year.

Regarding Gabby Eigenmann’s body features, he has dark brown eyes and black hair.

He is a man of an average height and body weight.

Similarly, he also has an account on social site Instagram which is followed by over 172k followers.