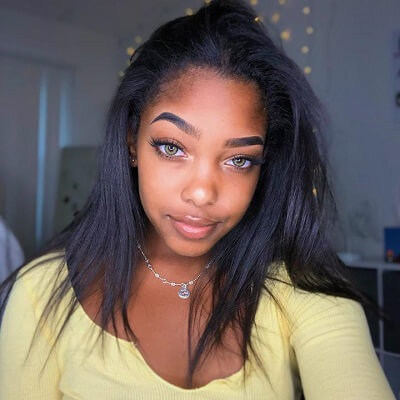 Gabby Morrison is currently in an open relationship with fellow TikTok star, Andre Swilley. Swilley has around 7 million followers on TikTok. He and Gabby frequently post pictures of them together on Instagram. The couple started dating since early 2019.

They go on vacations together and call each other, ‘love of my life’. Both of them look very happy with their relationship and also make TikTok videos together.

Who is Gabby Morrison?

Gabby Morrison is an American social media star and TikTok star. Morrison also has her own YouTube channel. Her YouTube channel has around 39.4k subscribers. She has around 2.3 million followers on her TikTok account. She usually posts TikTok videos to music by Xxxtentacion, Rico Nasty, and Tink.

Gabby Morrison was born on June 13, 2001, in the United States of America. As of 2020, her age is 18. Although her parents have featured in some of her TikTok videos, she has not revealed their identities.

Also, she has not revealed anything about her siblings. Morrison had a decent childhood and her parents were always supportive of what she wanted to do.

She is of Jamaican and Trinidadian descent.

Gabby has graduated from high-school. She posted a video of her prom on her Youtube channel. However, she has not revealed anything else.

Gabby entered the TikTok world with an introductory video that was set to an original sound by another TikTok star, Brock Jenkins. Since then, she has been on the rise. Her followers love her expressions and lip-syncing.

She usually posts TikTok videos to music by Xxxtentacion, Rico Nasty, and Tink. As of early 2020, Morrison has around 2.3 million followers on her TikTok account and has garnered more than 87.1 million hearts.

Morrison created her self-titled YouTube channel on October 8, 2018. Her first video was titled “Our First Q&A!” in which she answered several questions asked to her by her fans.

She has around 39.4k subscribers on her YouTube channel which has garnered more than 391k views in total. Her most viewed videos include ‘DOING MY BOYFRIEND’S MAKEUP ll GabbyMorr’ and ‘PROM 2019 GRWM’.

Both of these videos have gathered more than 100k views each. In total, she has uploaded six videos which included Q&As, Vlogs, Beauty Tips, Make-Up Videos, and more.

Gabby Morrison has an estimated net worth of around $500k. There is no information about her salary. TikTok does not directly provide a salary. So, it is hard to estimate her average annual income.

There are no rumors about her. Also, she has not been involved in any type of controversies. She has not anything controversial in her life so far. She is very much focused on her career and her followers adore her.

Morrison stands at a height of around 5 feet 7 inches and weighs around 56 kg. She has light brown eyes and black hair. Her shoe size and dress size are 8(US) and 4(US) respectively.

You may also like to read the Age, Bio, Career, Net Worth, Body Measurements, Social Media, and more about Kairi Cosentino, Cynthia Parker, Griffin Johnson, and more.