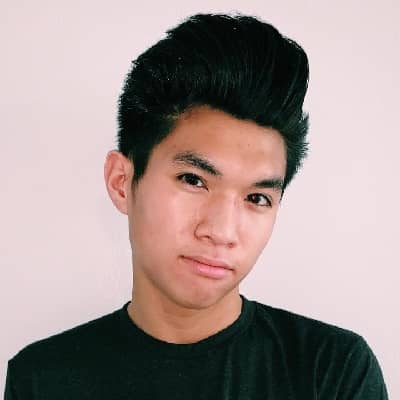 Gabe De Guzman’s current relationship status is possibly single. As he hasn’t officially announced anyone as her girlfriend or lover.

However, he seems close with Jayden Bartels at the moment. Jayden is one of the popular Musicall.ly star, actress, and dancer.

But the pair hasn’t yet disclosed as a boyfriend or girlfriend however, they seem close enough like they have more than friendship.

Previously, he has been in a relationship with Autumn Miller who is also a dancer. The pair started dating each other in 2017 and in the same year they end up their relationship.

Who is Gabe De Guzman?

Gabe de Guzman is an established star as a professional dancer and choreographer.

He is best known for his hip-hop and freestyle dance performances. Apart from his solo dance, he is also known for his awesome duos with Kaycee Rice.

The dancer was born on February 20, 2001. The birthplace of Gabe is in Murrieta, California. He is of American citizenship and belongs of Filipino descent.

He is the son of Florence De Guzman and Egay De Guzman. He has a sister named Danielle Kristina De Guzman. His full name is Gabriel G. de Guzman.

Moving towards his academic history, the detailed information regarding his academic institution is unknown at the moment.

At the age of 10, he won the Hall of Fame Junior Solo National Championship. He then appeared at the Kids Choice Awards as a dancer along with Will Smith in 2012.

In the same year, he was a part of a singing competition show, The X Factor appeared as a dancer alongside Carly Rose Sonenclar. The show was the second-highest earning show of 2012 with more than $5.55 million in ad revenue per half-hour.

After that, he was featured in the Microsoft surface commercial and on the TV series of Disney’s ‘Shake It Up.’ Similarly, he takes participates in season 9 of ‘America’s Got Talent’ together with his partner Kaycee Rice as Kaycee & Gabe in 2014.

Gabe is the winner of the 2015 Ellen DeGeneres Show, tWitch & Allison’s Kids Dance Challenge. Besides, he has also choreographed the video, “Turn Up the Music” song by his idol Chris Brown in 2017.

Gabe is the first member of ImmaBest because he was recruited directly by “WillDaBeast“. Additionally, he starred in the main role of Justine in Marittr Lee Go’s short film Illipino, released in 2020.

Also, he has appeared in the teen movie, ‘To The Beat! Back 2 School’ starring along with Jayden Bartels, Casey Simpson, Brisa Lalich, and more.

At his younger age, he suffered from asthma and other allergies.

Gabe’s main source of income is his profession as a dancer. He also choreographed and directed the videos.

As per other online sources, he has an estimated net worth in the range of $1 million to $5 million. However, he hasn’t yet revealed his exact salary, real estate to the public.

The dancer is 5 feet 8 inches tall and weighs around 62 kg. He has Black hair color with dark brown pair of eyes.

Furthermore, his other body measurement is unavailable.

Also, he has a self-titled Youtube channel with over 102k subscribers. His Snapchat handle is @hiphoptdc.