Updated On November 15, 2022 | Published By: Jacob Smith
Share this
Divorce 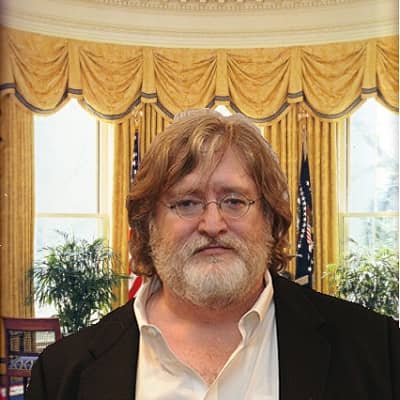 “I think Windows 8 is a catastrophe for everyone in the PC space. I think we'll lose some of the top-tier PC/OEMs, who will exit the market. I think margins will be destroyed for a bunch of people.”

What is the relationship of Gabe Newell?

Previously, Gabe married Lisa Mennet in 1996 and has two sons. Although he is not a very expressive person, he is known to spend a lot of quality time with his wife and children at their home in Long Beach, Washington.

The ex-couple has two sons, including Gray. The birth of Gray in the late 1990s served as inspiration for the final boss of Half-Life, as the couple considered childbirth to be the most frightening thing they could think of at the time.

In the year 2019, Newell and Mennet had divorced.

Who is Gabe Newell?

Gabe Newell is an American computer programmer and businessman, best known as the co-founder of ‘Valve Corporation.’

He is one of the pioneers in the field of advanced graphics and artificial intelligence (AI) in gaming. Also, he is the producer of the ‘Windows’ operating system versions 1.01, 1.02, and 1.03.

He was born Gabe Logan Newell, on November 3, 1962, in Seattle, Washington, US. His zodiac is Scorpio.

As he grew older, his interest in solving puzzles developed into a passion for computer games and information technology (IT).

Gabe has not revealed his parent’s information on social media as he does not likes to share his personal and private life with others.

Newell completed his education at Davis Senior High School in Davis, California. Then, Gabe studied at ‘Harvard University from 1980 to 1983. However, he soon dropped out of college to take up a job with the American IT giant ‘Microsoft.’

He later stated that he had learned much more during his first three months with ‘Microsoft’ than he could ever have at ‘Harvard University.’ Newell had a dream of becoming an entrepreneur in his own right from the time he started working.

Gabe started his career in computer programming with ‘Microsoft’ in 1983 and continued to work with them for the next 13 years. While with ‘Microsoft,’ he held several important portfolios, mainly in the field of program management and operating systems.

He was the driving force behind the introduction of ‘Windows NT’ by ‘Microsoft.’ While with the company, he traveled widely and visited many software companies to enrich himself with practical knowledge of how the industry functioned.

Newell and his co-worker Mike Harrington quit ‘Microsoft,’ as ‘Microsoft Millionaires,’ to start their own organization, ‘Valve Corporation,’ in 1996. They jointly funded the development of the science-fiction first-person shooter video games Half-Life’ and ‘GoldSrc’ for ‘Microsoft Windows.’

He is one of the pioneers in the field of advanced graphics and AI in gaming. Over 1500 games are distributed by ‘Steam,’ which has over 200 million users. ‘DOTA 2’ and ‘Team Fortress 2’ are the most popular video games on ‘Steam.’ In 2009, ‘Steam’ acquired over 70% of the digital distribution market for video gaming.

He also developed ‘Steam for Schools,’ an educational software that is widely used in schools to teach physics, chemistry, and math in a more interesting manner.

The software is interactive in nature, with a view to triggering young innovative minds. He was instrumental in the development of ‘PlayStation 3’ for ‘Sony,’ although he once termed it “a waste of everybody’s time.”

Its ‘Portal 2,’ which was a first-person puzzle video-game platform, was developed by ‘Valve Corporation.’ He appeared on stage at the 2010 ‘Electronic Entertainment Expo’ to deliver a talk on software.

He also developed the ‘HTC Vive virtual-reality headset hardware that uses ‘Steam’ and is in stiff competition with ‘Apple’s ‘App Store’ on ‘Mac.’

At present, his role at ‘Valve Corporation’ is that of the managing director of game development, with more emphasis on technology than game designing. However, he has always believed that keeping up with the latest trends and contemporary designs is very important for a game to succeed.

He has earned a huge amount from his profession working as a Businessman and Programmer. It is reported that Gabe has an estimated net worth of over $ 3.9 billion as of 2022.

Newell has never been part of any rumors and controversy till now. He prefers enjoying his personal life and does not want to merge it with his professional life.

Gabe has decent looks and an admirable personality. He stands at a height of 5 feet 7 inches and has a weight of 98 kg. Furthermore, he has green eyes whereas his hair is brown.

Regarding his social media presence, Gabe Newell has 2.7k followers on Instagram, and 19k followers on Twitter. But he is not active on