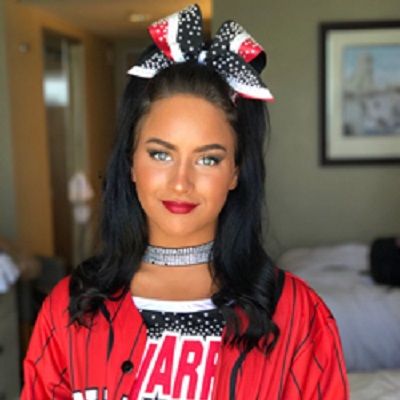 My parents are amazing and have always been there for me. Every time I have made money from cheer opportunities it has gone into my own account

My father already runs several successful businesses and has showed me how to create my own. They much me to be my best and I am more thankful than ever for their love and support.

She recently thanked him for being a best friend and boyfriend on via social media posts.

Who is Gabi Butler?

Gabi Butler is an American cheerleader and social media personality. She is also a TV star and has appeared in series like Cheer and Cheerleaders.

Her ethnicity is Caucasian. Her parents’ identities are not disclosed. Gabi’s father is a successful businessman.

She has three siblings, her sisters‘ name is Ashley & Amanda whereas her brother’s name is John Michael.

Regarding education, she has joined Navarro College, Corsicana, Texas.

Gabi from the age of 8 years started cheerleading. She was also a member of the cheer team during her college life.

Because of her cheerleading skills, she has won two world titles. At present, she is one of the members of the Top Gun cheer squad.

As a TV Personality

Butler has appeared in various series. She was seen in Cheer which is a Netflix series. She also gave her performances in the YouTube series Cheerleaders and Cheer Full Out.

As a YouTuber, Instagrammer

Gabi Butler is also popular on social media. She is active on Instagram and is followed by more than 1.3M followers and has over 415 posts.

She also owns a YouTube channel which was created on Sep 16, 2009. This channel has over 86.4k subscribers.

Gabi Butler is not involved with any huge rumors or controversies. Her professional and personal life is not suffered from any scandals yet.

This popular athlete has an estimated net worth of $500 thousand. From her YouTube channel, she earns an estimated yearly salary of between $1.6K – $26.4K.

Gabi Butler has hazel-blue eyes and brunette hair. Her height is 5 feet 2 inches and weight is 48 kg.

Gabi Butler has 109.1k followers on Twitter which she joined in June 2011. She is also has a Facebook account since Sep 2010 and has around 357k followers.