Gabi Wilson is a singer and she is the daughter of Kenny Wilson. Gabi is low-key about her romantic relationship. 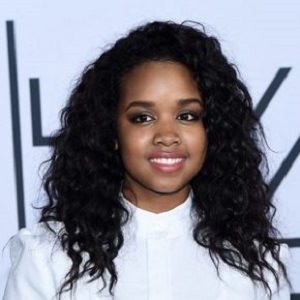 I'd rather have quality over quantity. It's about perfecting each song and making sure it's what you want to do. And then even with what I share it's all very strategic

As a black woman, I've always had to work hard to earn my respect as a musician - and as a young woman, too. As a writer, in certain sessions or certain rooms people think, 'Who's kid is this? Who's this little girl?' I've had to prove myself

To live your truth and sing your truth, that defines success.

22-year-old pop singer Gabi Wilson has kept her personal life private and out of the spotlight. She usually doesn’t talk about her private life in media and public.

She hasn’t mentioned about her affairs publically and has managed to keep it low profile. There is no any record of her marriage and divorce till now. She has not clarified about her married life, affair, boyfriend, and spouse till the present time.

Who is Gabi Wilson?

Gabi Wilson is an American pop singer. She is widely famous as the voice behind RCA Records’ mysterious artist, H.E.R. She is the daughter of former Urban Bushmen Band member, Kenny Wilson.

Gabi Wilson was born on June 27, 1997, in California, USA. Gabi is an American by nationality and belongs to Filipino-American ethnicity.

She is the daughter of Kenny Wilson and Agnes Wilson. Her father Kenny was a member of a local band called Urban Bushmen. Her mother is a native Filipina. There is no information about her childhood life.

Her educational background is unknown to the media. She had an interest in singing since her early childhood age. Wilson’s parents supported her love of performing and motivated her to become a professional singer.

Gabi began her career as a pop singer at a young age. She became widely popular as the voice behind RCA Records’ mysterious artist, H.E.R. She became more popular with her song, Something to Prove, which was released in 2014.

After that, she released another single song Prove in 2014. Her 2015 song Have Yourself A Merry Little Christmas made her more popular with the media and fans. Moreover, she has worked with Nick Cannon in several fields.

Her salary is unknown to the media whereas her net worth $2 Million.

Also know more about the early life, career, net worth, relationships, and controversies of other pop singers including Iggy Pop, Maddie Poppe, Cassadee Pope, That Poppy, and Shar Jackson.