Gabriel Boric is currently taken. Currently, he is in a relationship with a girl named Irina Karamanos.

His girlfriend joined him on stage during the election to support him. She is also a member of the Social Convergence party as her partner, leading the Feminist Front.

Talking about Gabriel Boric’s past romances, he dated Margarita Maira for three years from 2015 to 2018. Similarly, he had a brief fling with an actress Maite Orsini. 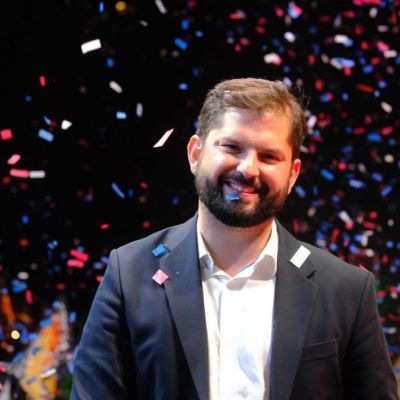 If Chile was the cradle of neoliberalism, it will also be its grave.

Do not be afraid of the youth changing this country.

Who is Gabriel Boric?

Gabriel Boric is a Chilean student protest leader, politician, and former law student. Gabriel Boric has been a member of the Chamber of Deputies, representing District 60 of Punta Arenas since March 2014.

He became a Presidential candidate for the leftist electoral coalition and will be sworn as President on March 11, 2022, defeating José Antonio Kast.

On July 18, 2021, Boric won the Apruebo Dignidad primary election for the 2021 Chilean general election and defeated Recoleta mayor Daniel Jadue with approximately 60% of the vote.

Eventually, he won the election with 56% of the vote against the opponent, Jose Antonio Kasto on December 19, 2021.

Gabriel was born on the 11th of February 1986, in Punta Arenas, Magallanes, Chile. His full name is Gabriel Boric Font.

He is the son of Luis Javier Boric (father) and Maria Font (mother). His dad is a chemical engineer and a public employee at Empresa Nacional del Petroleo for more than four decades.

Boric is the oldest of three brothers. The name of his one brother is Simon Boric Font. Further, he holds Chilean nationality whereas his ancestry/ethnicity is a mix of Catalan-Croatian.

Gabriel Boric attended The British School in his hometown. In 2004, she enrolled at the University of Chile’s Law School in Santiago.

Since high school, he was involved in student activism. In December 2011, he was chosen president of the student union while studying law at the University of Chile. He defeated Camila Vallejo with 30.52% of the votes.

He then led student protests for free schooling.

In 2013, Gabriel Boric was elected to congress representing Magallanes as an independent. He represents District 60 (currently District 28), which encompasses the Region of Magallanes and the Chilean Antarctic. Boric received a total of 15,418 votes (26.18%), the highest number received by any candidate in the region.

He won the presidential election of 2021 and defeated José Antonio Kast in the race. He will take his position officially from 11 March 2022.

He was not surrounded by any desperate rumors or scandals in the past. But he gained the public’s attention after winning Chile’s presential election with the highest vote of almost 56%.

As a president, Gabriel is living a lavish lifestyle. However, he hasn’t shared anything regarding his cars and real estate in the media. Gabriel Boric’s net worth is estimated at around $1 million as of 2021.

According to Wikipedia, the Chilean president’s salary is close to $196 thousand.

Gabriel Boric has a decent height with an average weight. He has a brown pair of eyes and as well brown hair color. Likewise, he has shaggy hair and a beard with tattoos on both arms.

However, the measurement of his exact height and weight aren’t available in the media.

Furthermore, he is also active on Tiktok with the username @gabrielboric and has over 296.1k followers.

Who is Irina Karamanos, girlfriend of President of Chile Gabriel Boric?